OCTLIGHT commercializes diode technology from the Technical University of Denmark. 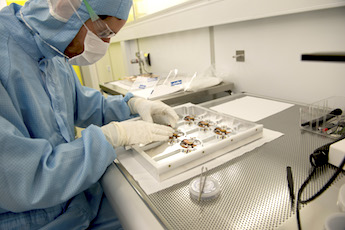 OCTLIGHT, a spin-out from the Technical University of Denmark (DTU) founded in 2014, has completed the product development phase of a new swept-source technology platform that could enhance ophthalmic OCT capabilities, particularly for retinal imaging and biometry.

"OCTLIGHT has an exclusive license to DTU patents covering VCSELs and wavelength-tunable lasers based on that technology" said Ansbæk. "The patents relate to methods of designing, packaging and electrically driving the source so as to achieve a very short cavity length and a wide free spectral range, which equates to a wide tunable wavelength range in use."

In announcing the new module, OCTLIGHT said it had successfully demonstrated a tuning range greater than 50 nm in the 1000 to 1100 nm wavelength region of interest for ophthalmic swept-source OCT. The project has also shown how this tuning range can be increased to 100 nm using established VCSEL high-gain material and broad bandwidth mirrors, according to the company.

The OCTLIGHT source employs a microelectromechanical system (MEMS) to provide its tuning capability. Advances in MEMS technology have played a significant role in VCSEL development in recent years, and in bringing about the improved scan rates and imaging depths that the sources can provide in biophotonics applications.

"High spectral purity is an inherent feature of the VCSEL architecture, but we can achieve a wider spectral range because of our work on cavity design and on electrically driving the MEMS," said Ansbæk. "This enables us to make the cavity shorter and the free spectral range wider."

OCTLIGHT intends to focus initially on retinal imaging, where the ability to scan at faster rates over a wider field of view is attractive for OCT angiography, gathering information about blood-flow in the retinal tissues. Another target application will be optical biometry, the accurate measurement of an eye's dimensions and anatomical characteristics prior to cataract surgery, carried out via a swept-source laser and interferometry.

Growing VCSEL markets
Financial backing for OCTLIGHT has included an award of €50,000 from the European Commission's Horizon 2020 SME Instrument in May 2017, following earlier from public funds The Innovation Fund Denmark and Market Development Fund. Based on the positive results, OCTLIGHT has closed a financing round to move into commercial contracts.

From his position as CEO, Ansbæk believes that the business climate for photonics start-ups and SMEs remains challenging, particularly for developers of hardware platforms, although assistance to bridge the ‘valley of death’ between the development of a technology and its commercialization is increasingly available.

"A lot of venture firms, especially here in Nordic region, have moved their focus from hardware to software, concluding that it is difficult to fit the development cycles and longer time-to-market of hardware into their business models," he commented.

""Business angels looking to invest in start-ups would prefer to see some of the risk reduced first, which government incubators such as Syddansk Innovation and public funding programs like the EU SME instrument are helping to do. I believe you can say that the market for very early stage investment is still maturing in Europe, in comparison to that in the USA, but things are now changing for the better."

Although OCTLIGHT is working towards ophthalmology applications at present, Ansbæk is closely following the current activity around the VCSELs market, as potential uses for the sources in high-profile consumer electronics platforms start to develop.

"We are currently focused on our ophthalmic end-uses but of course we recognize potential uses of our VCSEL technology in other applications," he said. "When Apple makes a move in this direction putting VCSELs in the iPhone X and strikes a $390 million deal with Finisar, that is something which resonates throughout the VCSEL industry."