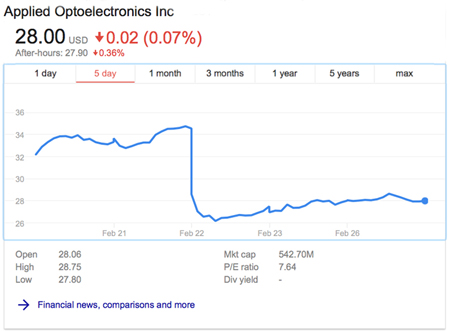 Immediately following the announcement of poorer-than-expected results, the company’s share price dropped by around 25% from $35 to a floor of $25 (see right), then gradually recovering somewhat over the past week to about $29.

At the results announcement conference on February 21st, Dr. Thompson Lin, Applied Optoelectronics Inc. founder and CEO, commented, “We achieved revenue in Q4 of $79.9 million, which was slightly below our expectations due to lower demand from our datacenter customers as they continue to evolve their network architectures. While our revenue came in slightly below expectations, I am pleased with our ability to continue to generate strong gross margin even in a price sensitive market.”

Lin added, “Even though we see inventory headwinds with one of our customers and the typical seasonality in Q1, 2018, due to fewer production days in China, because of the Lunar New Year, we continue to expect the second half of 2018 to be stronger than the first half. We believe we have a strong leadership position in advanced optics, and this belief is bolstered by a large purchase commitment announced earlier today.”

Of AAOI’s results, market analyst Barrons commented, “ Fiber-optic component maker AAOI reported Q4 revenue that missed analysts’ expectations, but beat on the bottom line, as it continued to struggle with lower sales into cloud computing operators, and forecast this quarter’s results to miss by a mile, sending its shares down sharply in late trading, though they regained some ground as the company disclosed it entered into a purchase agreement with Facebook [that deal was announced on December 20, 2017]." 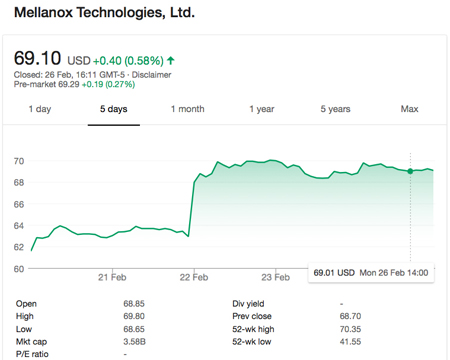 Eyal Waldman, CEO of Mellanox, commented, “Throughout the first quarter, it has become clear that the trends we experienced at the end of 2017 are holding firm, and customer transition from 10 gigabit per second to 25 gigabit per second Ethernet adapters is accelerating across the board.

“We are particularly pleased to see that this widespread adoption of 25 gigabit per second technology covers the majority of customer categories in every major market around the world, a direct result of the strategy we have been executing on in recent years. Our investment in R&D is driving product innovation and sustainable long-term growth, and we are well positioned to capture further market share as the landscape shifts to 25 gigabit per second and beyond.

He concluded, “We continue to build momentum and make progress on our financial and operational initiatives, by reducing our operating expense run rate and driving efficiencies in our business, and are confident that our focused investment strategy will continue to deliver positive results into the future.”

Mellanox also announced that Jacob Shulman has accepted an executive position at a pre-IPO company and will step down as Chief Financial Officer of Mellanox on May 4, 2018, after announcing fiscal first quarter 2018 earnings and signing off on the filing of the first quarter financials with the SEC. The company is evaluating candidates to succeed Mr. Shulman as CFO with the assistance of an executive search firm.