French scientists at Texinov Medical Textiles have developed a knitted laser fabric that can treat skin diseases such as acne, psoriasis, and actinic keratosis with light. 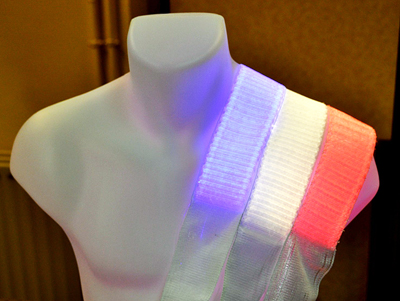 Chronic skin conditions can now be treated in a single 150 minute appointment with a wearable laser-bandage called Fluxmedicare that delivers light directly to the skin.

Fluxmedicare has been developed in collaboration with a pan-European health consortium PHOS-ISTOS. Following successful clinical trials, the painless laser fabric will be the quickest device to the market, says the developer, which adds that the laser bandage “will be used to eradicate unwanted skin conditions, with no side effects”.

Initially developed to improve the treatment of actinic keratosis (AK) – rough, scaly patches on the skin that develop from years of exposure to the sun – the light emitting textile is said to “be able to treat and even cure a number of skin complaints such as acne, Paget’s disease, psoriasis, and other diseases like baby jaundice”.

Dr Nadege Boucard, R&D General Manager at Texinov commented, “Fluxmedicare is unprecedented in the field of treating skin conditions. Since the lighting textile wraps around the individual contours of a patient, the emitted light in our device is uniform at every part of the body under treatment, meaning the beams are homogenous.”

An earlier technology used to treat skin ailments such as AK was photodynamic therapy (PDT), in which a patient stands by a lamp delivering its light from a flat pane. With the intensity of the treatment, this technology could cause severe pain and even redness in the skin, says Texinov.

“We haven't changed the approach of the actual PDT treatment. PDT treatment was already existing and is efficient, so we have kept it as it is. What we have changed is the light "support". We transfer it from rigid panel to comfortable textile,” added Dr Boucard.

“Previous PDT was unsatisfactory in many ways. Not only did patients report a pain ranking of at least 7/10 as well as burns and redness persisting for several days, but also, coming from a flat source, a lot of the emitted light was lost.” 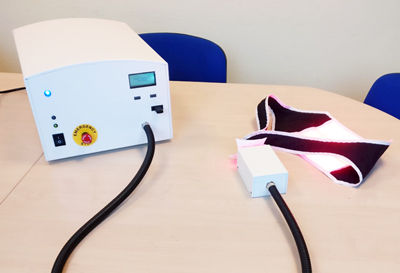 During the clinical trials with INSERM Onco Thai Lab-CHRU Lille and Klinikum Vest in Germany, patients reported an average pain ranking on the FLUXMEDICARE device of between 0 and 1 out of ten. The official clinical trial report is still being put together and will be published by the investigator CHRU Lille.

“The fact that we had a near 90% drop in pain levels compared to the previous technology, and the same efficacy was really promising. Fluxmedicare is easy to use for both the patient and the clinician,” said Dr Boucard.

“The Fluxmedicare device comes relatively cheap. The earlier PDT system would cost anything from €15,000 for the lamp and protective gear and require a dedicated set-up in a hospital room or within a dermatologist’s surgery. However, our laser system currently costs around €5,000.

“The FLUXMEDICARE device is flexible and mobile so a number of patients can be treated simultaneously. In the future in we hope to treat people in their own homes. The implied healthcare savings are substantial,” Dr Boucard said.

The team at PHOS-ISTOS expects to have their product ready for commercial uptake in April 2018.