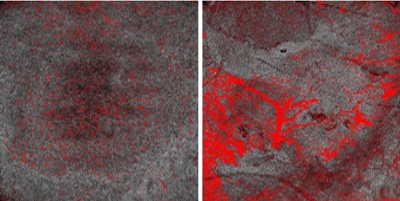 A clinical study of malignant melanoma suggests that optical imaging of the most aggressive form of skin cancer could yield a faster assessment of particularly dangerous tumors.

According to the UK-based optical coherence tomography (OCT) hardware developer Michelson Diagnostics, whose equipment was used in the study by four European dermatology research groups, the technique could offer a “short-cut” to identifying advanced cancers that have begun to spread.

That might provide patients with a more aggressive or advanced tumor access to appropriate treatment more quickly, while those with less virulent melanomas could be spared invasive and expensive sentinel lymph-node biopsies that can cause long-term side effects.

Metastasis risk
In a recent paper published in the journal Experimental Dermatology, lead author Nathalie de Carvalho from the University of Modena and Reggio Emilia, Italy, and colleagues correlated the specific shapes of blood vessels, measured using dynamic OCT, with the depth of melanoma – a characteristic known by dermatologists as the “Breslow index”.

Tumors rated with a Breslow thickness of more than 4 mm are regarded as being at a very high risk of metastasizing, while patients with a melanoma between 1 mm and 4 mm thick are seen to be at high risk. Both sets are typically advised to undergo sentinel lymph node biopsies.

“We found that certain vessel shapes appeared much more frequently in thicker tumors,” de Carvalho reported. “The vessels grown by the tumor seem to grow more chaotically and become more malformed as the cancer progresses.”

Michelson Diagnostics added that although the Breslow depth index is already used to assess the progress of melanoma development from its early stages to serious metastatic disease, it inevitably takes time for the biopsy results to come back from the laboratory.

“This new imaging approach may provide a short-cut to more quickly identify advanced metastatic melanomas so that patients can be fast-tracked to the right treatment,” stated the firm of the work with its “VivoSight” scanner.

The dynamic OCT technique, which captures the speckle of light patterns created by moving blood cells, was developed partly through a European project under the "FP7" research program, with earlier studies showing the ability to differentiate between melanomas and other types of skin lesion.

Next stage
According to Julia Welzel, a professor at the Augsburg General Hospital in Germany and another author on the paper, the goal is to develop a faster, more efficient, and less invasive diagnostic and therapeutic regime for melanoma.

“Patients with advanced disease should get aggressive treatment as quickly as possible,” she was quoted as saying in a Michelson Diagnostics release. “Also those with early-stage melanomas should not have to undergo expensive, invasive sentinel lymph node biopsy operations if their melanoma is reliably confirmed as very low-risk.”

However, more work is required to establish a clearer link between the shapes of blood vessels formed by a specific melanoma and its virulence. “The next stage is to analyze the link between vessel shapes and the actual degree of metastasis of the melanomas in a larger cohort, and not just the Breslow depth,” Welzel explained.

Welzel and de Carvalho collaborated with clinical researchers in Copenhagen and Berlin during the study, analyzing blood vessel shapes in 127 different melanomas at a variety of stages in disease progression.