Trade war takes the edge off record-breaking fiscal year, with a 10% dip in sales now pencilled in for 2019. 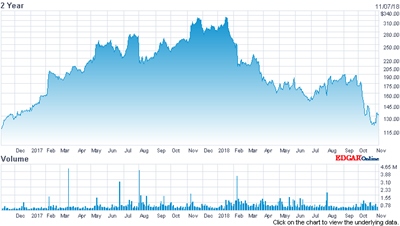 Laser giant Coherent has said it will cut costs in a bid to offset the ongoing negative impact of the US-China trade war and associated tariffs on its business.

Despite posting record-breaking sales and earnings per share in its fiscal year 2018, which ended September 30, the California-headquartered company missed its targets in the closing quarter - and now says that it expects sales to drop by around 10 per cent in fiscal 2019. Previously, the company had predicted only a 5 per cent decline.

CEO John Ambroseo told investors that the missed final-quarter target was the result of two significant events: a demand slowdown in China and “execution issues” at one of the company’s German facilities.

While the problems in Germany are now thought to be fixed, the impact of the trade war looks set to continue. “The demand challenges in China are largely due to US tariffs on Chinese manufactured goods,” explained Ambroseo. “Chinese tariffs on US goods are also affecting demand but to a lesser degree. This is mostly confined to the materials processing market.”

As a result, Coherent’s executive team has adjusted its expectations downwards for fiscal 2019, pencilling in an 8-12 per cent drop in sales. Having posted sales of just over $1.9 billion in the year just completed, that suggests a dip to around $1.7 billion.

Ambroseo and colleagues had originally said that sales in the closing quarter of fiscal 2018 would be somewhere between $465 million and $485 million. But last month the company warned that it would miss that target, and in fact posted a quarterly net income of $73.2 million on sales of $461.5 million.

Software implementation, China woes
Expressing his disappointment at the fourth-quarter result, Ambroseo expanded on the issues behind it, telling an investor conference call that implementation of a new management software system at a former Rofin-Sinar site - acquired by the company back in 2016 - had not gone according to plan.

“The site undergoing an implementation in the September quarter had particularly complex legacy practices that did not translate well,” the CEO said. “Gaps are normally identified through testing, but were not caught in this case either due to inexperience, lack of judgment or resistance to change.”

Moving on to what he described as a “pronounced weakening” of Chinese market conditions, Ambroseo added: “Market conditions in China began to noticeably erode around the middle of August as Chinese manufacturers came to grips with US tariffs on Chinese goods.

“The drop in export demand caused many Chinese customers to re-evaluate their expansion plans, leading them to push out or, in some limited cases, cancel orders,” he continued, pointing out that the effect was mostly confined to materials processing applications.

In the opposite direction, Chinese tariffs implemented on photonics-based products from the US have had less of an impact, but the difficult situation has been made worse by a new price war among fiber laser vendors – specifically fiber lasers in the 1-4 kW power range sold by Coherent.

“Customers claimed prices have been discounted up to 30 per cent within the September quarter,” said Ambroseo. “While pricing may be more about market share than end user demand, it forces greater discipline about what business to pursue.”

OLED delays
A key application area for Coherent is organic LED (OLED) display manufacturing, where its large excimer lasers play an important role. With numerous new OLED fabrication facilities under construction, or being converted from LCD plants, and Apple introducing two new OLED smart phones there are positive developments in the sector generally.

However, one of Coherent’s customers in this area has postponed a $10 million laser shipment from late 2018 to early 2019, while another has cancelled an order for two laser units after failing to win expected OLED business.

With the important market for semiconductor capital equipment also in something of a lull currently, Coherent's sales in the current quarter are expected to come in at around $385 million – well down on the $478 million total posted by the company for the same period last year.

The weakening overall demand picture has prompted Ambroseo and colleagues to implement some cost-cutting measures – including some job losses.

“The reductions come from a variety of sources including headcount, program spending and marketing,” said the CEO, estimating the steps would cut spending by between $10 million and $15 million.

On the plus side, Coherent said it delivered a vertically integrated fiber laser – featuring in-house produced high-power diodes – in the September quarter, and that it is ramping diode production, something that ought to help make its fiber lasers more competitive.

Ambroseo also said the company was making good progress in the automotive sector, with laser sales benefitting from the wider moves to more lightweight cars and adoption of electric vehicles.

Fiber laser price war
Asked about the dynamics of the fiber laser sector, Ambroseo told the investor call that the current price war in 1-4 kW sources had “erupted pretty quickly” between some of the market leaders, including both domestic Chinese and Western laser providers.

Last week Valentin Gapontsev, the CEO of fiber laser market leader IPG Photonics, also noted the fierce competition, claiming that Chinese firms appeared to be selling fiber lasers for less than the cost of the components from which they are built. Another rival, nLight, has noted "aggressive" competition but also said that it believed the pricing situation has begun to stabilize in China.

Ambroseo said he thought that, at some point, the trade war and tariffs issue would be resolved, but that the pricing situation might present more of a long-standing challenge.

“For those of us who have been around for a while, unfortunately we've seen this movie before in other photonics-based technologies,” he told investors. “We may be looking at it again.”

• Following the update Coherent’s stock price was relatively unchanged. At around $132 in early trading November 7, it is now down around 60 per cent from the all-time high of $329 reached in January this year.

The company is looking to take advantage of that decline, and has just authorized $250 million of possible stock repurchases through December 2019.