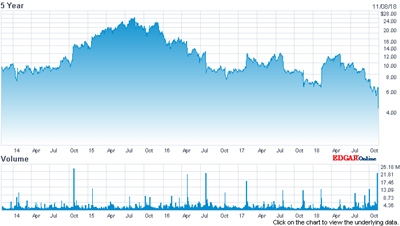 On the slide: Infinera stock (past five years)

Infinera, the Nasdaq-listed manufacturer of optical networking equipment based around photonic integrated circuits (PICs), has lost a third of its market value after telling investors that customers were “pausing” purchases while they evaluated the company’s recent acquisition of Coriant.

Completed in early October, the $430 million Coriant deal is intended to position Infinera to capitalize on an expected wave of spending on global network upgrades as 5G wireless connectivity becomes ubiquitous, and operators increasingly switch to open network architectures in which Coriant specializes.

The tie-up and increased vertical integration should boost Infinera’s sales revenues significantly, but when announcing the company’s latest financial results CEO Tom Fallon reported that the firm had “experienced a spending pause” from certain customers as they evaluated the combined entity.

And although he stressed that he believed the pause to be temporary, and that customer feedback regards the Coriant deal had been “exceptionally positive”, Fallon’s comments appeared to spook investors.

Spending uncertainty
In a conference call to discuss the results, the CEO added: “Looking forward, my expectation is, as a combined company, we will endure a couple of quarters of challenged revenue as customers have paused spend, taking time to assess our new roadmap and support plans for existing products as well as aligning contractual arrangements.

“We are working through this pause by actively engaging with customers and demonstrating the combined capabilities of the new Infinera. While the feedback from customers we have met so far is that they believe in the opportunity of the combination, we are still uncertain when they will turn back on spend.”

The “pause” means that in the closing quarter of this year Infinera is expecting to post sales of around $325 million – much lower than analysts had been expecting – alongside substantial losses as the company works to eliminate currently duplicated costs.

Convertible debt
Looking out to 2019, the Infinera team said that it was expecting to post annual revenues of at least $1.4 billion, as it positioned the company to benefit from the anticipated future hike in spending.

But having raised $350 million in convertible debt to help finance the acquisition of Coriant from private equity owner Oaktree Capital Management, and Coriant said to have been much less profitable than Infinera prior to the deal, the combined entity faces significant challenges as it works towards profitable operation.

Infinera’s stock price fell sharply immediately following the results announcement, ending November 7 down 33 per cent to close trading at $4.15 on the Nasdaq exchange and with a market capitalization of around $720 million.

The Sunnyvale firm has now lost around two-thirds of its value since April, and is down more than 80 per cent from long-term highs of around $24 it hit in summer 2016.