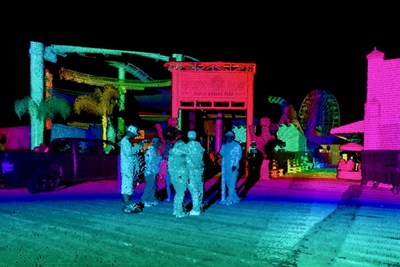 Car maker Volvo and the lidar firm Luminar say that the photonics technology they are developing is now capable of predicting the actions of pedestrians based on their poses and body language.

Showing off the system, which is based around a 1550 nm laser source, at this week’s AutoMobility event in Los Angeles, the two companies claimed a world first.

“The [lidar] fidelity enabled the Volvo Cars research and development team to achieve and demonstrate the first ever lidar-based pose estimation for autonomous driving,” they announced.

Predicting behavior
The term “pose estimation” is used to describe ways that pedestrian behavior can be understood and predicted by autonomous systems – for example indicating the likelihood of a person at the side of a road stepping in front of a car.

Ford and Luminar say that this has typically been done with two-dimensional data from cameras, but that lidar yields more useful three-dimensional information.

“With lidar that achieves camera-like resolution in 3D, this is one of many perception and prediction challenges that can now be reliably solved at distances near and far,” they say.

Luminar’s CEO and founder Austin Russell added of the Volvo tie-up, which saw the car firm’s technology investment fund acquire a stake in the California startup earlier this year:

“The Volvo Cars research and development team is moving at an impressive pace to solve some of the most advanced problems in the development of autonomous driving. As we’ve scaled up, they’ve remained on the forefront of developing an autonomous system to take the driver out of the loop - ultimately enabling deployment in real consumer vehicles.”

Henrik Green, senior VP for research and development at the car firm, added: “Autonomous technology will take driving safely to a new level, beyond human limitations. This promise to improve safety is why Volvo Cars wants to be a leader in autonomous drive.

“Ultimately, the technology will also create new benefits for our customers and society as a whole. Luminar shares our ambition in making those benefits a reality and this new perception technology is an important next step in that process.”

Autonomy challenges
While lidar is acknowledged by much of the auto industry as one of the key technologies required for fully self-driving vehicles operating at so-called “Level 5” autonomy, it is also widely viewed as expensive and not yet reliable enough for deployment.

As a result, dozens of startup companies developing the technology have attracted venture capital investment with their promises to close that gap.

However, only a handful of them are working with 1550 nm light sources, which are more technologically challenging and expensive to produce but allow much higher powers to be used – extending range and resolution when compared with the more conventional laser diode wavelengths around 1 µm.

Headquartered in Palo Alto, Luminar now employs around 400 people across its three sites – including a 125,000 ft2 manufacturing facility in Orlando, Florida. As well as Volvo, the company has partnered with Toyota’s US-based research institute to test the lidar technology.

• At the same Los Angeles event, upstart auto firm Rivian revealed two new lidar-equipped “adventure vehicles” that are said to offer Level 3 autonomy - defined as “conditional automation”, where a car can drive itself in certain circumstances.

Alongside its lidar sensors, the “R1S” and “R1T” models use cameras, radar, and ultrasound to help navigate and avoid collisions. The electric vehicles, aimed at customers with active lifestyles and also suited to off-roading, are earmarked for production at Rivian’s manufacturing plant in Normal, Illinois, from late 2020.