Office of Science and Technology Policy report calls for grand challenges and establishment of a 'quantum consortium' with industry participation. 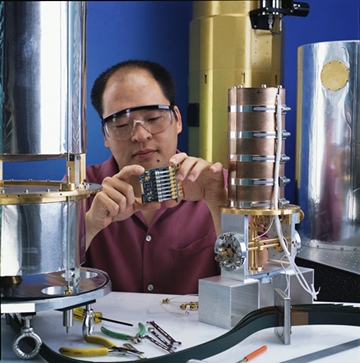 The White House Office of Science and Technology Policy (OSTP) has outlined a plan for the US to coordinate research and development activity in quantum technology, including calls for industry participation in a new consortium, and defining “grand challenges” in an effort to establish the US at the forefront of the emerging field.

“For the first time, The White House has gathered representatives from 13 federal agencies along with some of the greatest innovators in QIS. We convened everyone here because we recognize government cannot do this alone. With your expertise and leadership, we can focus on this field long-term, and realize the amazing potential of quantum science and technology.”

Takeaways
Key takeaways listed in the same document, based on break-out meetings that took place in Washington, DC, include:

A “national strategic overview” of QIS, authored by a special sub-committee of the US National Science & Technology Council (NSTC) and released in conjunction with the White House summit, identified the formation of a US “quantum consortium” as a key policy opportunity for deepening engagement with the emerging quantum industry.

The job of that consortium would include establishing a consensus on needs and roadblocks, areas for pre-competitive research coordination, and streamlining technology transfer mechanisms – as well as increasing investment in joint quantum technology research centers.

In the UK, where a similar national quantum program has already been running for several years, efforts are coordinated around four quantum “hubs” focused on applications in sensing, imaging, communication, and computing.

Photonics technology plays a critical role in each of those hubs, and is mentioned explicitly in the NSTC sub-committee’s report. In a section on deepening engagement with industry, it states:

“A critical element in a robust quantum ecosystem is a strong base of quantum-essential supporting technologies that are not intrinsically quantum in themselves. Current examples include cryogenics, photonics, low-noise microwave amplifiers, and nanofabrication.”

SRI will lead an effort devoted to quantum science and engineering, and said in a release: “The Quantum Economic Development Consortium (QEDC) aims to expand US leadership in global quantum research and development and the emerging quantum industry in computing, communications and sensing.”

NIST director Walter Copan, also Under Secretary of Commerce for Standards and Technology within the Trump Administration, added: “This new consortium will effectively align resources and quantum research and development efforts between federal, academic and industry partners to ensure America’s position at the forefront of scientific discovery and development.”

Competition and collaboration
Under the outline plan, QEDC members will collaborate on pre-competitive R&D including quantum device design and prototyping. “The intent of the consortium includes enabling access to quantum engineering capabilities to efficiently create, test and validate potential technology platforms and processes,” said SRI and NIST.

The two organizations added that in the coming months they plan to announce workshops addressing the consortium’s structure and governance, as well as the major R&D areas seen as essential for the emerging quantum field.

As acknowledged in an appendix to the NSTC report, several large US tech firms have invested in quantum computing development over the past few years, alongside a handful of ambitious venture-backed startups. However, quantum-related efforts in other parts of the world – notably the UK, Europe, and China – have taken the lead on coordinating efforts around central goals including non-computing applications, and competition is expected to ratchet up in the coming years.

In particular, Chinese researchers are seen to have stolen a march on the rest of the world with their deployment of a quantum-encrypted satellite link.

Noting the increasingly global nature of the quantum technology “race”, the NSTC authors add: “In a field where scientists are still very much fighting nature itself to make progress, humanity’s combined effort may be necessary to tackle the challenge. US leadership at this juncture will provide the key ingredients for this success.”