Market capitalization tops €80 BN after what CEO describes as a 'fantastic year'. 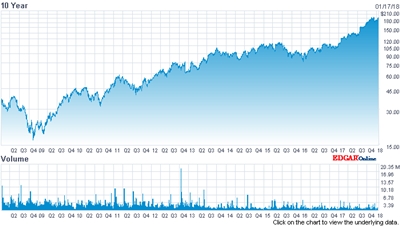 Shares in lithography equipment giant ASML have risen to an all-time high after the Netherlands-headquartered firm posted better-than-expected results for the closing quarter of 2017 and a positive outlook for 2018.

With CEO Peter Wennink describing the semiconductor market as “on fire”, ASML’s stock rose around 6 per cent in pre-market trading on the Nasdaq exchange, to $197.50. That represents the highest valuation in the company’s history, and is equivalent to a market capitalization in excess of €80 billion.

’Fantastic year’
“All in all, a fantastic year,” is how Wennink described 2017, after ASML’s fourth-quarter sales of nearly €2.6 billion beat expectations by around €400 million, tipping the full-year total beyond €9 billion for the first time.

The sales boost was partly the result of two EUV machine sales being signed off by customers earlier than had been expected, and partly thanks to additional demand for more conventional deep-UV (DUV) lithography equipment towards the end of the year.

Wennink, who had previously described 2016 as the year in which EUV “turned the corner”, said that the new tools met some important technical and commercial targets in 2017 – perhaps most significantly the achievement of 125 wafers per hour throughput, along with an average tool availability in excess of 90 per cent.

“With EUV sales crossing the €1.1 billion mark, 2017 was the year in which preparations for inserting EUV into high-volume chip manufacturing shifted into a higher gear,” commented the CEO.

He also revealed that ASML received orders for ten additional EUV tools in the closing quarter of 2017. That brings the outstanding backlog to 28 tools, worth close to €3 billion.

ASML shipped ten EUV tools last year, a figure that will rise to an expected 22 this year as additional production capacity comes online in the second half. “2018 will be back-end loaded, but will be significantly up on the 2017 figure,” Wennink said, adding that shipments will rise to at least 30 tools in 2019, although the number actually shipped will be limited by the capacity of the EUV supply chain.

Each of the EUV tools is based around high-power carbon dioxide lasers and a "trigger" laser that generate broadband emission of light when fired at a procession of tin droplets inside the EUV source chamber. Specialist optical components fabricated from diamond are also required. 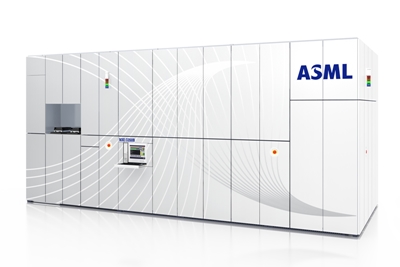 Market ‘on fire’
Describing the wider semiconductor market as “on fire”, the CEO said that demand from both logic and memory chip manufacturers remained very strong. He added that 2018 would mark the start of a ramp in the production of logic devices at the 7 nm “node”, the first for which EUV patterning has been adopted.

“All in all, it looks very positive,” added Wennink in his outlook for the year, with both sales and net profit both expected to improve on the record-breaking figures posted for 2017.

ASML now looks well on course to hit its 2020 revenue target of €11 billion, with Wennink and CFO Wolfgang Nickl maintaining that the sales level at that point will depend largely on the extent of EUV insertion and the timing of future production ramps.

The strong performance has prompted the company’s executives to propose an increased shareholder dividend at ASML’s forthcoming annual general meeting. At €1.40 per ordinary share, up from €1.20 last year, the company will be set to return some €600 million to its shareholders.

• ASML also said it had appointed Roger Dassen as its new CFO. A professor of auditing at the Free University of Amsterdam, Dassen is a former CEO of Deloitte Netherlands and currently a senior executive at Deloitte Touche Tohmatsu. He is scheduled to take over from Nickl, whose departure was announced last year, from June.