Yole Développement senses start of ‘massive’ deployment in data centers and beyond. 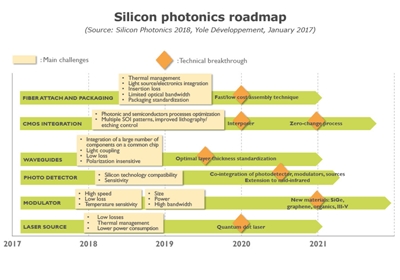 Silicon photonics is on the cusp of widespread deployment and transceivers based on the technology will command a market worth $4 billion by 2025.

Those are two of the main conclusions from a new analysis of the emerging sector published by Yole Développement. Eric Mounier and colleagues estimate that sales of silicon photonics chips amounted to just $30 million in 2016, but see applications in data centers driving that total to around $560 million by 2025.

“Silicon photonics technology will grow from a few percent of [the] total optical transceiver market value in 2016 to 35 per cent of the market in 2025, mostly for intra-data center communication,” the analyst team predicts, explaining that demand for 400 Gb/s links will be the primary driver.

“The next evolution is to develop a 400 G optical port over a single fiber across 500 meters at less than $1 per gigabit and with power [less than] 5 mW/Gb,” said Mounier.

Terabit-per-second rates should follow, he adds, suggesting that although the semiconductor wafer area required for such applications will only be a minute part of the worldwide silicon-on-insulator (SOI) market, it will represent significant value because of the higher price of the more advanced material – sourced from key wafer supplier Soitec.

Tipping point
Mounier has co-authored the Yole report with Jean-Louis Malinge, the previous CEO of Kotura who has since moved to the venture capital outfit ARCH Venture Partners. They claim that silicon photonics technology has “clearly reached its tipping point”, with transceivers finally now shipping in volume.

“We believe we are only at the very beginning as there is massive ongoing development worldwide for further integration,” added Mounier. “The recent involvement of large integrated circuit foundries, such as TSMC’s relationship with Luxtera, and GlobalFoundries with Ayar Labs, are very encouraging signs showing the big promise for silicon photonics.”

“STMicroelectronics is the major silicon photonics manufacturer today,” add Mounier and Malinge in their report. It also highlights the so-called “Zero-Change” processes currently in development, for which no changes to regular CMOS processing are required to produce optical components.

“Silicon photonics is at the maturity level of the electronics industry in the 1980s and there are still challenges to overcome,” they say, pointing to the still-outstanding problem of building and integrating a silicon laser.

On that front, the Paris-based analysts suggest that there is still competition with VCSELs for short-distance links, and that the development of silicon laser emitters is no longer progressing. “Quantum dot lasers could be a solution in [the] long term as they are less temperature sensitive,” they add.

Other challenges center on modulators, test and assembly, the need for dedicated software with pre-defined models, supply chain maturation, and the longer-distance transmission.

Luxtera and Intel lead
Demand for the technology is being fueled by the explosion in internet traffic attributable to social networks and video and gaming content, with greater bandwidth required for inter- and intra-data center communication.

“As a short-term answer to this possible bandwidth congestion, new photonics technology for transceivers is still pulled onto the market by Google, Apple, Facebook, Amazon and Microsoft - and now by Baidu, Alibaba and Tencent in China,” reports the Yole team.

“Indeed, in China data centers are expanding fast, with over 650 million internet users and three big operators setting up their own fiber networks. In 2018, new hyperscale data centers will be set up in China to expand the growth of optical components, newly installed fiber, and optical technologies.”

Meanwhile in the West, the likes of Facebook and Microsoft are partnering with Intel to overcome the traffic bottlenecks and increasing energy demands emanating from data centers.

Mounier and Malinge say that, after 16 years of development, Intel has successfully penetrated the sector and currently shares the bulk of the market with lead player Luxtera. But they add that Acacia has recently enjoyed success with its single-chip silicon photonics 100 G coherent transceiver for metropolitan applications, potentially opening up another market for the technology in telecoms.

Lidar potential
Another key area could be high-performance computing, where the critical performance bottleneck has shifted from processor chips to the communications infrastructure.

Yole also anticipates deployments in biomedical applications and sensors, pointing out that autonomous vehicles will require a high level of security with very low latency to enable rapid reactions by self-driving cars traveling at speed.

“Lidar is also an attractive application for silicon photonics, with IMEC developing the necessary technology, and with some [research] projects already having started,” adds the report.

• Silicon photonics will once again be a key theme at the forthcoming SPIE Photonics West event in San Francisco. Among the keynote speakers during the OPTO symposium will be silicon photonics pioneer Andrew Rickman, the co-founder of Bookham Technology who is now heading up Rockley Photonics.

Earlier this month Rockley announced a $42 million joint-venture agreement with China’s HengTong Optic-Electric that is set to start producing silicon photonics transceivers later this year. Unlike other proponents focused on shrinking silicon photonics technology, Rickman’s view is that “bigger is better” when it comes to the technology, and his OPTO plenary may prove somewhat iconoclastic.