Satellite spectrometer measures temperature of cloud tops as the ex-hurricane dumps a deluge on Houston.

Ex-hurricane Harvey is now heading northeast after leaving Houston largely under water, and the storm’s movements have been tracked all the way by a battery of Earth observation equipment.

One such piece of kit is NASA’s atmospheric infrared sounder (AIRS) instrument, which was launched as part of the “Aqua” satellite's suite of tools back in 2002. Among other things, AIRS measures the temperature at the top of clouds – with colder readings indicating the presence of huge, high-altitude storm clouds holding billions of gallons of water vapor that are dumped as rainfall.

Tracking Harvey's evolution
This sequence of three images from AIRS that were captured on August 23, 25 and 28 clearly show the evolution of Harvey as it formed in the Gulf of Mexico and then stalled over southeast Texas. 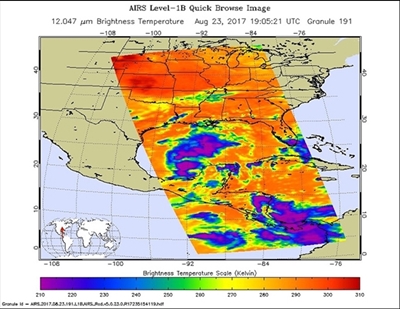 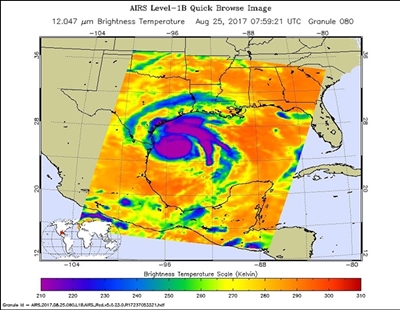 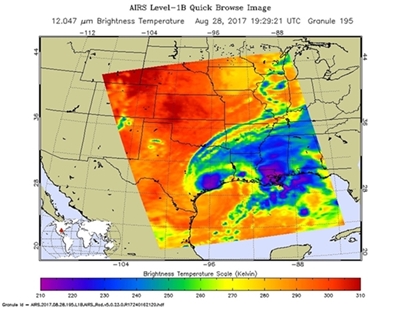 One of the most critical elements of the hardware is a mercury cadmium telluride (MCT) focal plane featuring 2378 individual spectral channels to ensure the high spectral fidelity required for accurate sounding measurements.

NASA JPL says that, when launched, AIRS had a spectral resolution 100 times better than previous infrared sounders, providing much more accurate information about the vertical profiles of atmospheric temperature and humidity. Prior sounders had looked at only 15 different infrared wavelengths.

AIRS is one of six Earth observation tools on board the Aqua satellite, and is often partnered with an advanced microwave sounding unit (AMSU-A) to observe global water and energy cycles, climate variations and trends including the response of the global climate system to changes in greenhouse gas concentrations.

Water vapor and climate
While carbon dioxide and methane tend to dominate the headlines when it comes to greenhouse gas discussions, NASA points out that it is in fact water vapor that is the most dominant greenhouse gas in the Earth’s atmosphere.

“It accounts for about 60% of the greenhouse effect of the global atmosphere, far exceeding the total combined effects of increased carbon dioxide, methane, ozone and other greenhouse gases,” explains the space agency.

“AIRS advanced technology makes it the most advanced water vapor sensor ever built.” As well as helping to forecast and track the movement of storms and hurricanes, the captured data is also being used to improve climate models.

In 2005, NASA reported that incorporating experimental AIRS data into numerical weather prediction models had improved the accuracy of six-day weather forecasts by some six hours.

As a result, the instrument data have since been incorporated officially into both US national and European weather forecasting models – and identified by National Oceanic and Atmospheric Administration (NOAA) officials as providing the single most significant improvement to weather forecasts in recent years.

“European Centre for Medium Range Weather Forecasts studies have shown that in many circumstances, AIRS is responsible for reducing forecast errors by more than 10 percent. This is the largest forecast improvement of any single satellite instrument of the 2000s.”

In recent years the AIRS instrument’s monitoring of relative humidity near the surface of the Earth indicated the onset of drought nearly two months before any other equipment or data, and confirmed climate theory predicting that global warming would create a positive feedback loop of further warming, by increasing the amount of water vapor in the atmosphere.

Originally the brainchild of NASA scientist Moustafa Chahine, who died in 2011, the AIRS mission had only been expected to run for five years. Now in its sixteenth year of operation, it is still going strong and should provide weather forecasters and climate scientists with key data until 2022, when the Aqua satellite finally runs out of fuel.