Director of the Istituto di Fotonica e Nanotecnologie in Milan begins her three-year term in October. 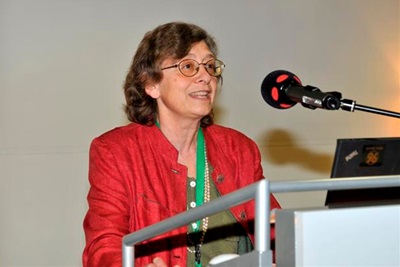 Roberta Ramponi, director of Italy’s Instituto di Fotonica e Nanotechnolgie, has been elected as the new president of the International Commission for Optics (ICO), the international body representing the global optics and photonics community.

Ramponi, who also chairs the Photonics21 work group dedicated to photonics research, education and training and is currently one of ICO’s 15 different vice presidents, was elected at the organization’s latest congress, taking place this week in Tokyo, Japan.

She succeeds the current president Yasuhiko Arakawa, director of the Center for Photonic and Electronic Convergence at the University of Tokyo, and begins her three-year presidential term in October.

Photonics for society
Arakawa led the organizing committee for what was the 24th ICO congress, which was based around the theme of “science for society”. High-profile speakers at the event included Nobel physics laureates Hiroshi Amano on the subject of “a new era of LEDs”, and neutrino expert Takaaki Kajita.

Among the top-level dignitaries supporting the event were the emperor and empress of Japan, who attended the opening ceremony. optics.org publisher SPIE is an international society member of the ICO, and SPIE’s CEO Eugene Arthurs commented from the congress:

“The presence of the Japanese emperor and empress at the opening ceremony was a strong indication of the high regard in Japan for the field of optics and photonics and for its economic and social importance.

“The high-quality presentations and the presence of so many of the world's leaders were impressive. Professor Arakawa deserves strong praise for organizing an event that very compellingly demonstrated why this science is so valuable to society.”

Optofluidics expertise
Aside from the ICO and Photonics21 roles, president-elect Ramponi has previously served a term as president of the European Optical Society, and is the scientific chair of the Italian national technology platform entitled “light sources and photonic sensors”.

Having initially worked on the development of laser-based instrumentation for biomedicine, mainly for diagnostic applications, she has since focused on nonlinear and integrated optics, and related applications - including the fabrication and characterization of waveguides in nonlinear crystals and passive and active glasses.

In other developments at the Tokyo meeting, John Harvey from the University of Auckland was elected an ICO vice president, while SPIE member Joseph Niemela of the Abdus Salam International Centre for Theoretical Physics (ICTP) in Italy was elected ICO treasurer.

SPIE Fellow Carmiña Londoño from the US National Science Foundation was selected as the SPIE-appointed vice president. In that role, she succeeds former SPIE president María Yzuel, from Universidad Autónoma de Barcelona.