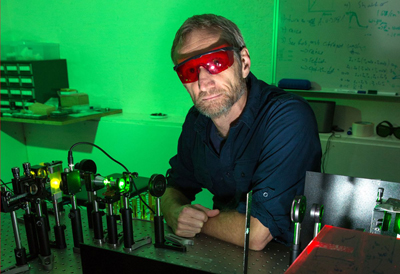 High-power lasers have many potential applications: from medical imaging to manufacturing, shooting down hostile drones or space junk, or powering deep space probes. But current laser technologies tend to overheat at high powers.

Prof. Mildren and his team developed a technique to make diamond lasers that, in theory, have extraordinary power range. In 2012, their lasers output just a few watts. But by 2017 the devices are delivering 400 W.

The team’s calculations suggest that their diamond laser technology could handle over a thousand times the current output power. They have also shown that they can use diamond to focus multiple laser beams into a single beam. Furthermore they can create almost any frequency of light.

Prof Mildren commented, “Diamond is an outstanding optical material and exceptionally good at dissipating heat. But it’s not very good at generating a laser beam as its dense structure makes it difficult to introduce the impurity additives normally needed to amplify light. Until now.”

He discovered that he could use light scattering (the Raman effect), which works as follows: when light shines on the diamond crystals, some is scattered at a single frequency. Prof Mildren’s team has developed a suite of techniques to enhance this effect in diamonds to create their high-power lasers.

The first applications of Rich’s work are already under development. M Squared Lasers, based in Glasgow, UK, has already licensed the technology to create lasers for quantum computing and biological imaging.

US and Australian defense researchers are also major investors into this research area, which has the potential to be used to tackle drones, boat swarms, and missiles.

Prof. Mildren added, “diamond provides us with a new approach to making lasers that could impact many areas of science and technology – we are looking to see how its unique properties can tackle big challenges such as developing high-power lasers for gravitational wave sensing or for manipulating space debris and small space vehicles.

Barbara Messerle, the Executive Dean of Science and Engineering at Macquarie University, commented, “What’s exciting about Rich and his team is that they’re doing the basic research, they’re generating patents (seven to date), and they’re working with industry.

“Macquarie is now the world leader in the development of Raman lasers, using the scattering effects of light within crystals to transform conventional laser output—to reach new wavelengths, higher powers, or improved quality.”

“We’ve developed the science over the past decade from fundamental research through to device research and commercialization to the point that it is an attractive and versatile commercial technology.”