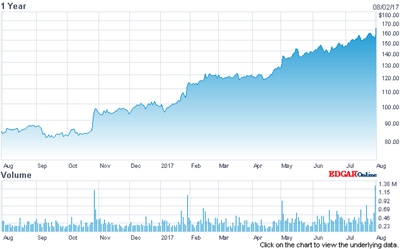 The stock price of fiber laser giant IPG Photonics has risen to an all-time high after the Oxford, Massachusetts, company posted a sharp increase in sales in the second quarter and a strong outlook for the rest of this year.

At $369 million, revenues rocketed 46 per cent on the same quarter last year, and along with a net income of $104 million was sharply higher than the company had previously guided and Wall Street analysts had been expecting.

Those numbers and subsequent commentary from the IPG executive team prompted a 9 per cent rise in the company’s stock price, which closed August 1 at a record high of $166.39. With virtually no debt and more than $800 million in cash on its latest balance sheet, IPG’s market capitalization now stands at close to $9 billion.

China drives growth spurt
IPG’s CEO and founder Valentin Gapontsev told an investor conference call that he believed the rate at which the company’s fiber lasers was replacing both conventional lasers and non-laser technologies, like machine presses to punch and stamp metal, was accelerating.

“Demand for our core products, particularly high-power, kilowatt-scale fiber lasers, has never been stronger,” he said, adding that with fiber laser cutting systems accounting for one-third of the installed base, there was still plenty of runway for further sales growth.

Sales of high-power lasers specifically jumped 57 per cent year-on-year, with Gapontsev and IPG’s CFO Tim Mammen highlighting that when the typical 5-10 per cent annual drop in the average selling price of the lasers is also factored in, the company’s rate of growth in terms of total output power shipped or diodes produced is even faster than the headline revenue figure.

Mammen noted that the fastest rate of growth was emanating from China and its huge base of machine tools, with revenues doubling year-on-year and now equivalent to half of IPG’s total. The latest quarter also witnessed a strong increase in demand from customers in Europe, with a diversity of applications feeding into the sales pipeline.

Sales of quasi-continuous-wave (QCW) fiber lasers also rose sharply, with record quarterly revenues of $29 million up more than 80 per cent year-on-year thanks to demand for fine welding in consumer electronics applications, and percussion hole drilling in the aerospace industry.

120kW laser
Looking to the future, Mammen responded to an investor query about opportunities in the automotive industry by saying that the switch to electric vehicles, while still in its early stages, ought to translate to a significant growth driver over the next 4-5 years, thanks to battery production requirements. 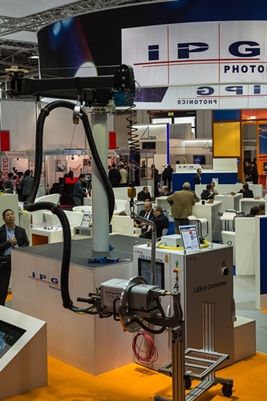 IPG at the LASER show

Gapontsev is similarly confident that applications in heavy industry will become a huge market for IPG in the future, where the requirement will be for fiber lasers delivering powers of more than 10 kW.

To that end, IPG unveiled a new 120 kW industrial fiber laser at the recent LASER World of Photonics event in Munich. Back in 2012, IPG received an order from a Japanese customer for a 100 kW fiber laser, to be used in deep-penetration welding applications.

Gapontsev also highlighted what he sees as a potentially very large emerging market in medicine, with replacement of YAG-based lasers for urology applications expected to become a key area. “The future is not only [about] cutting and welding,” the CEO told investors.

With strong order flow also pointing to a bumper third quarter, IPG’s executives are currently anticipating that sales will remain close to the Q2 level, coming in at somewhere between $350 million and $375 million before dropping off somewhat in the closing quarter of the year.

If correct, it suggests that the company will pass the $1 billion sales milestone in just the first three quarters of 2017. Last year, IPG’s annual sales topped that figure for the very first time.

Mammen told the investor conference call that total 2017 sales should end up around 33 per cent higher than 2016, implying that revenues will be approximately $1.34 billion this year.

The 9 per cent rise in IPG’s stock price following the latest results means that the company’s valuation has near-doubled over the past 12 months.