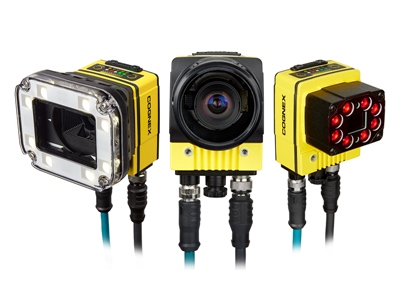 Buoyed by booming demand for applications in factory automation and what looks to be a major emerging opportunity in organic LED (OLED) display production, Cognex delivered sales of $172.9 million in the three months ending July 2.

That represented a 17 per cent increase on the same period last year, while quarterly net income of $56.1 million was up 30 per cent year-on-year.

Q3 blowout and OLEDs
“What a great quarter!" is how Shillman, the MIT alumnus who set up the firm back in the early 1980s, described it. “The highest quarterly revenue in Cognex's 36-year history came from growth across the broad factory automation market. Equally important is that we also set a new, and ridiculously high, level of profit.”

CEO Robert Willett was hardly less exuberant, noting strong demand across a range of geographies and markets, telling an investor conference call that the company was moving faster than ever before, before adding: “If you like those results, just wait until you see Q3!”

With a spike in sales for consumer electronics applications set to be recorded, the Cognex executives have pencilled in a likely revenue of $250 million and $260 million for the current quarter – although that will be something of a one-off, with sales dropping back to more normal levels in the closing quarter of the year.

Part of the reason behind the ramp in recent demand relates to the requirements of OLED display production. The lightweight, ultra-thin and increasingly popular screens, which are expected to appear in forthcoming generations of mobile devices from Apple, are harder to make than LCD screens, with more fragile material layers and a need for very precise alignment.

“Vision is important in every step of OLED display manufacturing, and the final assembly of the modules,” Willett told investors. The Cognex CEO expects adoption of the company’s technology to come “in phases” as OLEDs become more widely deployed, and he sees a major role emerging in automotive applications.

Foxconn LCD facility
There is also the potential for a major investment in machine vision technologies at a giant new Foxconn LCD screen manufacturing facility planned in Wisconsin that was announced by the key Apple supplier last week.

The $10 billion investment envisaged would see a 20 million square-foot facility constructed over four years and thousands of jobs created, according to a White House release.

Exactly how many jobs are created at the new plant will depend to some extent on the level of automation and machine vision technology deployed there.

Though not commenting specifically on the Foxconn plans, Cognex CEO Willett said that the company’s technology was typically ordered around a year before factories ramp to volume production levels. Assuming that the Foxconn build does go ahead as planned, it would suggest that Cognex will not receive a direct boost from the project for at least three years.

But in the meantime the company is set to continue racking up sales and profits at a very healthy margin. Armed with $765 million in cash and liquid investments - and no debts - on its balance sheet, Cognex is also ideally positioned to continue making acquisitions. In the just-reported quarter, it snapped up Switzerland-based artificial intelligence firm ViDi Systems. 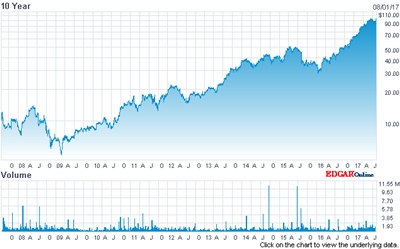 With the anticipated Q3 boom, the company’s executives indicated that annual revenues this year should wind up somewhere north of $700 million – up more than one-third from the record-breaking $521 million posted in 2016.

Already at a record high ahead of the earnings release, Cognex’ stock price was poised to surge to new levels before the Nasdaq stock market, where it has been listed since 1989, opened August 1.

Trading at around $95 ahead of that opening, the company already commands a market capitalization in excess of $8.2 billion.

• Update: Cognex's stock price rose close to 10 per cent in value in pre-market trading August 1, to around $104.