Coherent slips back despite record quarter

Stock price plunges in value by 20% as record revenues and profits fail to impress investors. 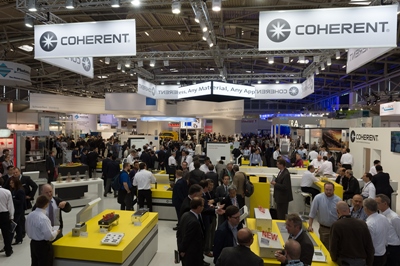 California-headquartered laser giant Coherent saw its stock price plunge in value by 20 per cent after releasing its latest quarterly results, despite posting record-breaking revenues and profit.

For the three months that ended July 1, sales revenues came in at $464.1 million, and delivered a net income of $61.1 million. Both figures represented huge increases on the same period last year, since when Coherent has acquired and begun to integrate Rofin-Sinar.

The stock sell-off, which wiped around a billion dollars off the company's market capitalization, appears to be a response to lower-than-expected operating margins. Coherent attributed that, in part, to currency effects and expenses incurred in renegotiating the terms of the $750 million loan used by the company to complete the Rofin deal.

Simple story
CEO John Ambroseo kicked off a conference call to discuss the results by telling investors: “We have a very simple story for Q3: record revenue, record profit and sustained strong demand. All our attention is on execution.”

The $41 million sequential uptick in revenues was driven primarily by the buoyant microelectronics market, which accounted for just over half of Coherent’s sales, while Ambroseo said that the company was capacity-constrained in the area of high-power fiber lasers thanks to growing demand for the products in materials processing applications.

“The response from customers was quite good, particularly from China and Europe,” said Ambroseo. “We will begin shipments of the 3 kilowatt module late this quarter or early next quarter.”

To address the capacity issue, Coherent is also moving to expand its diode packaging operations, alongside those for fiber laser integration and testing. “The additional capacity will be staged over the next year,” Ambroseo said.

OLED build-out
Production of organic LED (OLED) displays remains a huge sales driver for Coherent, and that looks set to continue well into the future as new fabrication facilities are completed in Korea and China, Ambroseo added.

With that in mind, Coherent is investing to add capacity at its sites in Osan, Korea, Göttingen in Germany, and Richmond, California, to provide the anticipated laser systems integration, optics and servicing expertise required as OLEDs proliferate in mobile devices and make further inroads in laptop and tablet screens.

"We had another record-setting result in our most recent quarter and demand remains buoyant,” said Ambroseo. “We booked a significant number of large format (i.e., Gen 5 or Gen 6) ELA tools for OLED manufacturing.”

He added that production tool utilization within OLED fabs was currently very high, and that with more installations moving into the service pool, orders and sales would continue to climb. “The outlook for flat-panel displays is bright, with multiple new fabs having been announced or in the late stages of planning,” said the CEO.

“Memory prices remain very high and manufacturers are adding capacity to meet demand,” said the CEO. “High utilization of larger nodes for IoT (Internet of Things) devices such as sensors has revitalized the service business and is driving capacity expansion at legacy nodes.

“Finally, growth at leading nodes translates into inspection tool sales. Based on multiple market research sources, it appears the streak will continue well into fiscal 2018.” 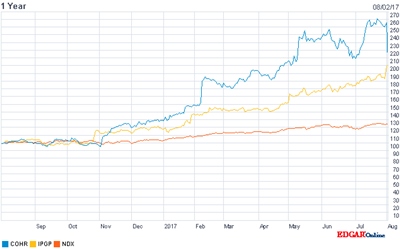 20% correction?
With demand for ultrafast lasers in industrial applications also on the up, alongside that for medical lasers and workstations for producing medical devices, there appear to be few weak areas for Coherent right now – and the company is predicting that sales in the current quarter will rise again, to around $475 million.

The company is taking advantage of the current level of cash generation by paying down some of the loan taken out to complete the Rofin deal. During the latest quarter, Coherent made a voluntary payment of €45 million against the outstanding debt. “Using excess cash flow to pay down the debt will remain a priority,” Ambroseo told investors.

To put the 20 per cent slump in Coherent’s stock price following the latest results release in context, it comes after a year-long growth spurt that has seen the company surge in value (see figure, left). At around $216 on the Nasdaq exchange in early trading on August 2, the stock is still worth twice as much as it was 12 months ago.