Equipment used at Very Large Telescope (VLT) in Chile shows stellar detail only previously captured with our own Sun. 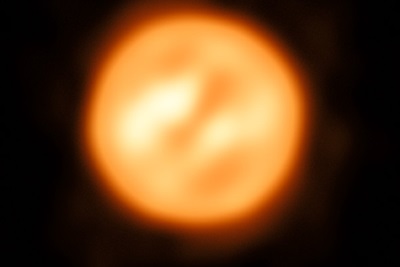 An interferometer system deployed at the European Southern Observatory’s published details of their unexpected findings in the journal Nature.

Lead author Keiichi Ohnaka, from Universidad Católica del Norte in Chile, said that the observation would give astronomers clues about how red giant stars lose mass so quickly when in the final phase of their evolution.

The VLT’s interferometer system (VLTI) is uniquely able to capture the motion of gas on the distant star because it combines light from four different telescopes to create a “virtual” mirror diameter of around 200 meters.

“The VLTI is the only facility that can directly measure the gas motions in the extended atmosphere of Antares,” Ohnaka said. “The next challenge is to identify what’s driving the turbulent motions.”

Using the new results Ohnaka and colleagues have created the first two-dimensional velocity map of the atmosphere of any star, other than the Sun.

To achieve that, they used three of the movable auxiliary telescopes in concert with VLTI and a near-infrared beam combiner unit to make separate images of the surface of Antares over a small range of infrared wavelengths.

Vigorous motions
In their Nature paper, the authors reported that the velocity field map revealed “vigorous upwelling and downdrafting” motions of several enormous clumps of gas extending well beyond the edge of the star itself, at a level six times greater than expected. “Convection alone cannot explain the observed turbulent motions and atmospheric extension, suggesting the operation of a yet-to-be identiﬁed process in the extended atmosphere,” they wrote.

“In the future, this observing technique can be applied to different types of stars to study their surfaces and atmospheres in unprecedented detail. This has been limited to just the Sun up to now,” Ohnaka added. “Our work brings stellar astrophysics to a new dimension and opens an entirely new window to observe stars.”

As the brightest star in the Zodiac constellation of Scorpius, Antares appears distinctly red-orange in color to the naked eye, indicating the red supergiant nature similar to that of Betelgeuse in Orion.

Like Betelgeuse, Antares is expected by astronomers to explode into a supernova at some point in the future when its fuel reserves are expended.

According to ESO Antares currently has a mass around 12 times that of the Sun, and already has a diameter approximately 700 times larger – indicating the expansion that will eventually see it collapse in on itself with such colossal energy that for a few months it may be visible on Earth during the daytime.

ESO video: Best Ever Image of a Star’s Surface and Atmosphere