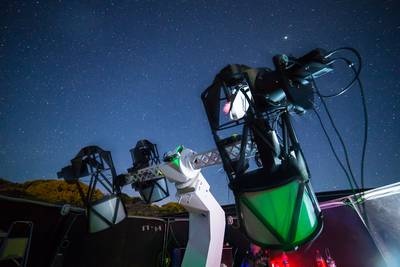 A set of wide-field optical telescopes designed to search the night sky for signs of cosmic phenomena causing gravitational waves is now up and running.

Built at the popular astronomy observational location at the summit of La Palma, an island off the west coast of Africa, the Gravitational-wave Optical Transient Observer (GOTO) was officially inaugurated July 3, having captured “first light “ imagery three weeks earlier.

The multinational project involves universities in the UK, Australia and Thailand, and will scan large areas of the sky for any unusual activity following alerts of gravitational-wave detection from laser interferometer facilities.

Elusive signals
As of today, scientists working at the two giant Laser Interferometer Gravitational-wave Observatory (LIGO) facilities in the US have confirmed three separate detections of the elusive waves, typically described as “ripples in space-time”, that were generated by collisions between black holes.

But because there are only two working facilities, currently it is impossible to pinpoint the precise origin of the waves and the location of the cosmic collision. A third interferometer called VIRGO, near Pisa in Italy, is now joining the search and will enable scientists to triangulate the source of the wave signals with much greater precision, but astronomers also want to search for electromagnetic evidence.

The big challenge is that the gravity-wave signals appear out of the blue without warning, while it also takes months to confirm each “event” from the data collected, by which point any transient optical evidence of the event will have long disappeared from view.

This is where the GOTO project comes in: it is set up to react swiftly to any indication of a possible gravity-wave event emanating from the LIGO and VIRGO facilities, point at the area of sky where the signal is believed to have originated, and look for any sudden changes.

‘New observational opportunity’
The two key partners in the GOTO project are the University of Warwick in the UK and Monash University in Australia, working under the “Monash-Warwick Alliance”. Warwick’s Danny Steeghs and Duncan Galloway at Monash are the two principal investigators on the team.

“GOTO is very significant for the Monash Centre for Astrophysics,” commented Galloway in a release from the consortium. “We’ve invested strongly in gravitational wave astronomy over the last few years, leading up to the first detection announced last year, and the telescope project represents a fundamentally new observational opportunity.”

Steeghs added: “After all the hard work put in by everyone, I am delighted to see the GOTO telescopes in operational mode at the Roque de los Muchachos observatory. We are all excited about the scientific opportunities it will provide.”

According to the GOTO web site, the new facility at La Palma will target the early stages of gravity-wave follow-up, when the origin of a signal is not well established, and large swathes of the sky must be searched quickly for any signs of transient events.

“Targeting the earliest (and likely brightest) phases will allow for rapid localization of viable candidates and trigger further follow-up on other, larger facilities,” states the team.

“A key component is a synoptic survey mode when not pursuing an event trigger. This ensures very recent reference images are available across the visible sky.” 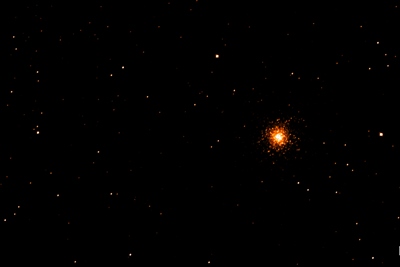 Adaptable hardware
The hardware deployed on GOTO is described as scalable, adaptable and upgradable, using ‘off-the-shelf’ components to minimize costs, including an array of 40 cm diameter astrographs to achieve a large, instantaneous field of view.

In the initial phase just started, four telescopes featuring 50 megapixel detectors are deployed on a single mount, yielding a field of view of five degrees square per telescope.

Depending on how clear the skies are, and the phase of the moon, the setup should be able to image to brightness magnitudes of 20 or 21 within five minutes.

Since the gravitational wave events detectable by the LIGO and VIRGO facilities relate to distant black-hole collisions, GOTO would likely be looking for any sudden changes in the apparent position of stars and galaxies caused by gravitational lensing effects.

In the planned second phase of the project, an additional four telescopes should extend the field of view to 40 degrees square, providing for a much more rapid scan of the sky.

Another set of telescopes in a second dome at La Palma and an entirely new facility in Australia to search the southern skies are also planned for the future.

As well as the GOTO observatory, the University of Warwick’s astronomical facility at La Palma also includes the “SuperWASP” camera for detection of exoplanets. Described as “the most successful ground-based exoplanet discovery project in existence”, it is another wide-field, multi-telescope optical design, and uses eight cameras fitted with CCD sensors from Andor Technology to capture exoplanets as they transit in front of their host stars, from the Earth’s point of view.

The other partners in the GOTO project are the UK’s University of Sheffield and University of Leicester, alongside Armagh Observatory in Northern Ireland and the National Astronomical Research Institute of Thailand.