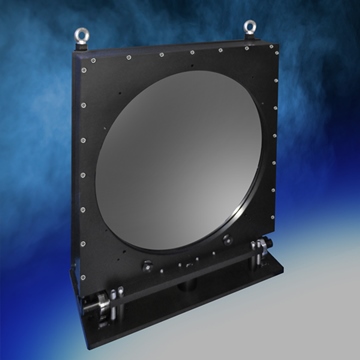 The silver-coated, two-axis, gimbal-mounted reference flat is said to have a surface accuracy better than 20 nm (rms), and a surface quality of 40/20 scratch/dig to minimize scattering effects.

The Extreme Light Infrastructure for Nuclear Physics (ELI-NP) facility under construction in Magurele represents the third of the enormous “pillars” of the wider ELI project, all of which are based around huge lasers with unprecedented power, brightness and repetition rate characteristics.

Once completed, ELI-NP will feature the most powerful laser system ever built: a 2x10 PW design. And Optical Surfaces points out that the €60 million contract awarded to Thales to produce it is the largest contract award by a national research institute under a European-funded program.

The other two ELI “pillars” – constructed in the Czech Republic and Hungary – are at a more advanced stage, with the various systems at ELI Beamlines near Prague and ELI-ALPS in Szeged set to open to users partially in 2018, ahead of full operation at Szeged in 2020.

High-level delegations
In late May ELI-ALPS, home to an attosecond pulse laser system that will give scientists from a variety of fields completely new ways to investigate ultrafast physical phenomena, was officially inaugurated.

Lithuanian company Ekspla is one of the key laser providers involved the ELI-ALPS project, and the country’s representatives were in Munich partly to discuss the possibility of Lithuania becoming a founding member of a European Research Infrastructure Consortium (ERIC) dedicated to ELI. 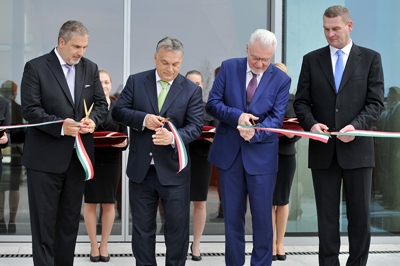 As with ELI-ALPS, user operations at the Beamlines facility are slated to begin in 2018 on the “L1” laser, one of four optical systems. L1 is aimed at materials and biomolecular applications, and is designed to produce 100 mJ pulses of less than 20 fs duration, at a repetition rate of 1 kHz.

The L2 and L3 lasers at the Czech facility will offer petawatt-scale pulse powers at unprecedented repetition rates of 10 Hz, while the L4 beam will scale to 10 PW pulses delivering 2 kJ of energy in 130 fs pulses at a rate of approximately one pulse per minute.