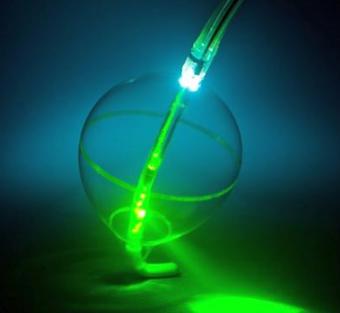 The HeartLight platform from Massachusetts-based CardioFocus is designed to treat atrial fibrillation (AF), a condition in which the heart's atrial chambers lose their normal beating rhythm for a period.

Having been cleared for use in Europe for some time, the system was awarded FDA approval in April 2016 and used in its first US commercial procedure the following October.

Speaking to Optics.org at the time, CardioFocus VP of Engineering Jerry Melsky commented that there was "huge potential for the HeartLight laser platform in the US."

Further proof of that potential should come from the trio of new clinical studies using the platform that are now commencing, which between them should see up to 1,000 AF patients enrolled.

HeartLight treats AF through the creation of a deliberate pattern of lesions and scarring around the point where the pulmonary veins enter the atrium, known to interfere with the electrical signaling involved in AF.

Use of a laser delivered to the site by a balloon catheter brings a greater level of finesse to this process than the previous use of radio-frequency (RF) ablation or cryogenic probes, and allows more sophisticated and effective patterns of lesions to be made.

The three new trials include a ten-center European study to directly compare HeartLight with a commercially available RF ablation catheter, involving up to 350 patients and lead by Asklepios Klinik St. Georg in Hamburg, Germany.

A second study led by the Cardiovascular Center Bethanien in Frankfurt am Main, Germany, will enroll 400 patients and assess HeartLight in comparison to an existing cryogenic approach termed cryoballoon ablation.

The final trial will be based at up to 25 sites in the US and see the clinical outcomes of 250 HeartLight patients evaluated, in order to confirm results of an earlier US clinical pivotal study and study additional research questions.

$20 million funding round
"We are greatly encouraged by all the positive data collected to date on the HeartLight System and look forward to the results of these new exciting studies enrolling up to 1,000 AF patients," said Paul LaViolette, CardioFocus Executive Chairman.

"Our goal is to be a leader in the field of pulmonary vein isolation, which includes supporting the initiation of clinical studies that provide further evidence of the HeartLight system's impressive safety and efficacy profile and make this technology more widely accessible to the more than nine million patients in the US and Europe who are suffering from AF."

CardioFocus was founded in 1990 as Rare Earth Medical, whose medical laser interests included a system intended to help prevent coronary artery restenosis - the re-narrowing of the blood vessels after angioplasty procedures. The discovery that tissues located in one or more of the pulmonary veins played the key role in cases of AF led the company to adapt its laser technology to this new application.

In May 2017 the company completed a $20 million round in equity financing, to support expanding commercialization of the HeartLight platform. SEC filings indicated that the company had originally sought $32 million for its funding campaign.

The cash will also be used to drive development of the company's next-generation HeartLight Excalibur Balloon, the initial clinical evaluation of which commenced in January 2017.

According to the company, the Excalibur platform features a more physically compliant construction and the ability to be more responsive to a range of operating variables. This should maximize the engagement of the balloon with the pulmonary veins, while decreasing the time required to complete the ablation procedures.

"We are encouraged by the positive feedback we have received on the Excalibur Balloon, and look forward to obtaining European regulatory approval and making the technology commercially available by year end," said LaViolette.