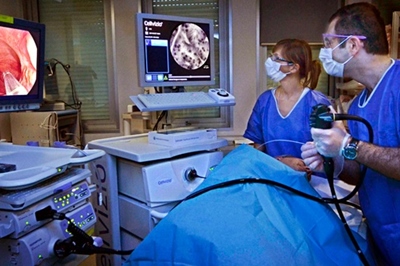 Mauna Kea Technologies, the France-headquartered developer of advanced endomicroscopes that provide optical “biopsy” information to clinicians and researchers, has posted a sharp drop in sales in its latest financial results.

CEO and company founder Sacha Loiseau says that the fall is due to the change in business model to a “pay-per-use” approach in the US for the firm’s flagship “Cellvizio” confocal laser endomicroscopy platform. The technology is used to look for signs of cancerous and pre-cancerous growths in situ, without the need to remove tissue for conventional histopathology analysis. In the US, the focus is currently on gastrointestinal (GI) tract applications.

“We continue to believe that this new model represents a significant opportunity to accelerate Cellvizio adoption and build long-term recurring revenue for consumable probes,” Loiseau said, pointing to delays recruiting sales representatives in the US as one of the reasons for the current dip in sales.

“We’re confident that the switch [to a consignment model] is good, and there are signs that we have done the right thing,” he told an investor conference call to discuss the latest results.

Although shipments of consumable probes were also down sharply, to 254 units, Loiseau pointed to a 12 per cent increase in clinical sales to customers in the US as evidence of some positive momentum. He added that with a new sales team coming together in the US, the second half of the year should see an upturn in fortunes.

Another challenge faced by the company concerns its licensing agreement with Cook Medical. In late 2015, Mauna Kea and Cook signed a deal under which Cook planned to launch a private-labeled version of Cellvizio for urology applications – for example detection and surveillance for cancer recurrence among patients treated for bladder cancer.

Cook duly started buying systems in early 2016, but the sales relationship has ground to a halt since then after Cook received a warning letter from regulators at the US Food & Drug Administration (FDA).

“It’s been very frustrating,” Loiseau said in the investor call, although he is hopeful that the long and completely unforeseen delay should be at an end soon, after Cook finally received an exemption letter from the FDA and can go ahead with the urology initiative.

“We’re in constant communication [with Cook] and now we’re confident that he partnership will deliver, and that the opportunity is very significant,” the CEO added.

Cash burn
In the meantime, Loiseau will have been keeping a close eye on the company’s balance sheet. Having burned through €8.4 million during 2016, Mauna Kea was left with €9.1 million in cash assets at the end of last year.

Since then the company has raised €7 million in debt finance, receiving the first tranche of €4 million in February 2017. At the time, Mauna Kea’s then-CFO Benoit Jacheet said that the cash was needed in part to support the Cook Medical partnership, but the terms of the loan look to be relatively punitive - the senior secured notes bear interest at a rate 8.5 per cent above the average rate at which European banks lend to each other.

Asked to update investors on Mauna Kea’s current cash position and burn rate, Loiseau declined, saying instead that the latest figures would be disclosed in September – and that the company was “very mindful” of the cash situation.

“[We] believe [Mauna Kea] is leaner and more efficient than ever,” responded the CEO.

The company’s stock price dropped 15 per cent after the latest results and is currently trading 35 per cent lower than at the start of 2017.