Stock price up 9% after the bellwether photovoltaics firm lifts sales and profit forecast in transitional year. 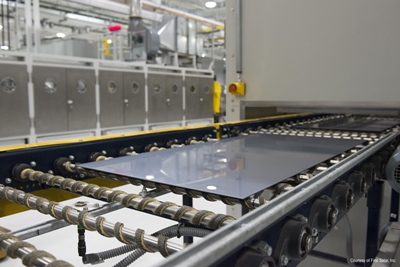 US-based photovoltaics giant First Solar says that its pipeline of orders grew strongly in the latest quarter, with decisions to install the technology now largely based on economic value rather than political support mechanisms.

Revealing substantially lower sales revenues compared with last year but also a large jump in bookings, CEO Mark Widmar told an investor conference call that the company was feeling strong demand from the US, India, Asia-Pacific and Europe.

“First and foremost, the increasing affordability of solar continues to be a fundamental driver of global demand,” he said. “We continue to see substantial demand in established markets and the emergence of new markets with significant growth potential.”

Transitional year
Widmar pointed out that 2017 was always going to be a challenging year for First Solar. That is partly because of the uncertainty of global supply and demand for PV, but also because the Arizona-headquartered company is in the middle of a transition to its “series 6” cadmium telluride module.

Late last year First Solar decided to skip a generation of products and transition directly from “series 4” to “series 6” production, with Widmar describing the accelerated move to the more advanced module as the “best competitive response” to the challenging market conditions it faced when rival crystalline silicon panels again dropped in price sharply.

The subsequent restructuring and round of job reductions both in the US and abroad have already had a dramatic impact on the company’s expenses.

In the latest financial quarter, sales of $623 million were down sharply from the figure of $1.02 billion in the equivalent period last year. But thanks to a variety of cost-cutting measures, which have included slashing research and development spending by one-third, Widmar and his executive team have been able to minimize losses and even posted a positive quarterly net income.

The plan appears to be working, with the CEO telling investors that a large chunk of the new orders received in the latest quarter relate to agreements involving shipment of series 6 modules. Those modules should begin rolling off the company’s freshly tooled Ohio production lines around the end of this year, with First Solar also now prepping its idle Vietnam facility for series 6 production.

Economic reality
Widmar also indicated that despite concerns in the US about future political support for PV and other renewable energy technologies, economic realities were now holding sway.

“The underlying demand drivers for project development opportunities in the US and selected international markets such as Japan and Australia are very encouraging,” he told investors. “For example, in the US, over the past year alone, we have observed a greater than 50 per cent increase in utility-stated plans to deploy solar as part of their target resource mix.”

Widmar and his team now estimate that over the next four years, this represents more than a 10 GW opportunity. “It's important to note that this is fundamentally driven by economics and not solely by a renewable or solar-specific mandate,” the CEO added. “A decision to install solar has moved from a political mandate to an economic decision.”

With guidance for shipments, sales and profits in 2017 all revised upwards, and production of the new series 6 modules expected to ramp to 1 GW in 2018 and further improve profitability, First Solar’s stock price rose nearly 10 per cent in value following the latest earnings release and investor update.

Now trading at around $49 on the Nasdaq exchange (equivalent to a market capitalization of $5 billion), the stock is virtually unchanged from a year ago, but has near-doubled in value since hitting a long-time low when it dipped below $26 in April.