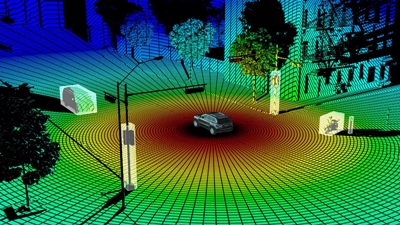 All in the algorithm: LeddarTech's auto lidar

Global lighting company Osram has purchased a 25 per cent stake in LeddarTech, the Quebec City developer of lidar technology for autonomous vehicles.

Announced alongside Osram’s latest quarterly financial results, the move is said to represent a “mid-double-digit million euros” investment in LeddarTech, which spun out from Canada’s National Optics Institute (INO) a decade ago.

Natural fit
LeddarTech’s CEO Charles Boulanger said he saw a “great natural fit” between the two companies, boasting: “LeddarTech is on its way to becoming the reference in solid-state lidars for the automotive industry, and we believe our association with the market leader in automotive lighting represents an important milestone in that direction.”

Osram’s investment in LeddarTech is cited as part of a wider financing round currently under way, with further details expected to follow soon.

The Canadian firm is one of dozens of well-funded startups and spin-outs now working on lidar for autonomous vehicles, and describes its “Leddar” approach as a “unique combination of advanced lightwave signal processing and software algorithms”.

Also targeting markets like drones and industrial automation, LeddarTech says that its technology is able to recover distance information for every object in its field of view, thanks to the way that its patented software is able to expand the sampling rate and resolution of the lidar signal’s “echo”.

In a white paper describing its approach, the company claims that it is compatible with a variety of low-cost photodetectors and light sources, including PIN photodiodes, VCSELs and even white-light LEDs. Others in the emerging auto lidar sector – notably Luminar Technologies and Intel-backed AEye – insist that higher-specification 1550 nm lasers are necessary for true autonomy and to "see" darker objects at longer distances, largely because the more eye-safe wavelength provides for a much higher photon “budget” and greatly improved signal-to-noise.