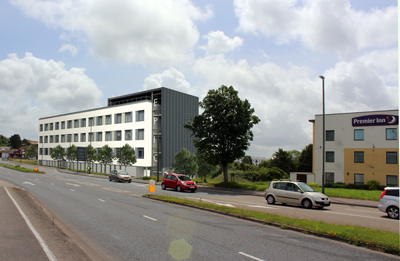 EPIC plan: planning application made, with opening set for 2019.

A planning application for the UK’s Electronics and Photonics Innovation Centre (EPIC), to be built in south west England, which was first proposed in 2015, has finally been submitted to Torbay Council’s Planning Department.

The EPIC, which will be built in White Rock, Torbay, will primarily focus on photonic integrated circuit packaging, a core expertise in this region, which already hosts the likes of Gooch & Housego (making precision optical assemblies and components in nearby Torquay) among others.

When up-and-running, at least 160 new jobs are set to be created in photonics, micro-electronics and related activities in the center, which is expected to generate around £11.4 million ($15 million) of new business in the local sector each year.

Following two years’ delay, the EPIC is now re-scheduled to open in 2019 instead of 2017. The reasons for the delay were “the challenging funding environment”, according to developer TDA, the Torbay Development Agency, which is working on behalf of Torbay Council. The TDA explained, “There were delays in securing the ERDF grant and Growth Deal funding from central Government after Brexit. The other elements of the project were dependant on securing and receiving the funding.”

The application comprises a 3,834m2 purpose-built innovation center, along with car parking, landscaping and a new estate road. The proposed center will be a four-storey building comprising 15 laboratories and clean rooms, up to 27 offices, along with reception and meeting rooms. The center is intended to be a cornerstone in supporting the growing hi-tech sector across Devon and Somerset.

The EPIC is an £8 million project, funded from a range of different sources:

The EPIC’s key partners named so far include the Torbay Hi-Tech Forum. The TDA has also engaged with Southampton, Bristol, Plymouth and Exeter Universities on this project. Talks have also taken place with the Compound Semiconductor Catapult in Cardiff and the Fraunhofer Centre for Applied Photonics in Glasgow.

Torbay’s elected Mayor and Executive Lead for Finance & Regeneration, Gordon Oliver commented, “Torbay is one of the top five locations in England for photonics expertise and a hub for advanced electronic engineering. The EPIC will be an important center for research, product design and new development in cutting-edge technologies. Torbay’s strong local supply chain, highly trained employees, excellent access to markets and integrated business network will further support this project.”

Alan Denby, Director of Economic Strategy at TDA, added, “This is a key milestone in an exciting flagship project for Torbay, which is designed to support and grow an important sector in the area. The submission is a significant piece of the jigsaw in the economic regeneration of White Rock, and complements the proposed development of South Devon College’s new Hi-Tech and Digital Skills Centre.”

• The photonics sector nationally is estimated to contribute over £12.9 billion annually to the UK’s economy, growing at around 5.3% per year. It already employs around 65,000 people across 1,500 photonics companies.