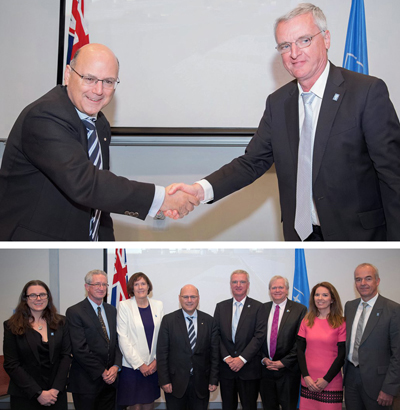 A ten-year strategic partnership between Australia and the European Southern Observatory (ESO) was agreed this week at a signing ceremony in Canberra. The partnership will further strengthen ESO’s program, both scientifically and technically, and give Australian astronomers and industry access to the La Silla Paranal Observatory in Chile. It could also be the first step towards Australia becoming an ESO Member State.

In May 2017 the Australian Government announced its intentions to negotiate a strategic partnership with ESO to give Australian astronomers access to ESO’s research infrastructure. The new partnership means that Australia will financially contribute to ESO for ten years, with the potential of then obtaining full membership. The partnership was unanimously approved by the ESO Council.

The signature ceremony was held at the Australian National University in the capital, Canberra, during the annual meeting of the Astronomical Society of Australia.

Introductions were made by Nobel Laureate and ANU Vice-Chancellor Brian Schmidt, followed by speeches from ESO’s Director General, Tim de Zeeuw, and the Australian Minister for Industry, Innovation and Science, Arthur Sinodinos, who then signed the arrangement.

Senator Arthur Sinodinos commented, “This important partnership with a world-class organisation, such as the European Southern Observatory, will allow Australia to maintain its research excellence in this era of global astronomy, and it provides crucial opportunities for Australian influence and technical and scientific input, stimulating international research and industry collaborations.”

ESO Director General Tim de Zeeuw commented, “This strategic arrangement will give Australian astronomers — as well as technical institutes and industries — access to the La Silla Paranal Observatory. An association between Australia and ESO has been a personal goal of mine for more than 20 years, and I am very pleased that it is now becoming a reality.” 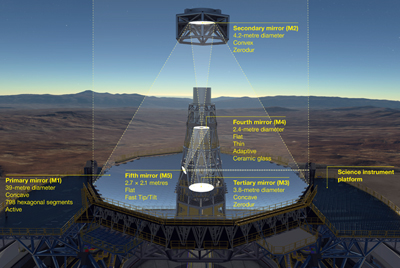 The optical system of the ESO's ELT showing the location of the mirrors.

The parties agreed that Australia’s expertise in instrumentation, including advanced adaptive optics and fibre-optic technology, is ideally matched with ESO’s instrumentation programme. In turn, Australia will gain access to industrial, instrumentation and scientific opportunities at the La Silla Paranal Observatory, essentially being considered a Member State for all matters relating to these facilities.

de Zeeuw added, “Australia’s contributions to the partnership will strengthen ESO, and ESO’s facilities will allow Australian astronomers to make many discoveries and develop the next generation of high-tech instrumentation to the benefit of science and technology worldwide.”