Teams at Stanford, Dallas Solar and Energy Materials Corporation all win substantial backing in $46M round. 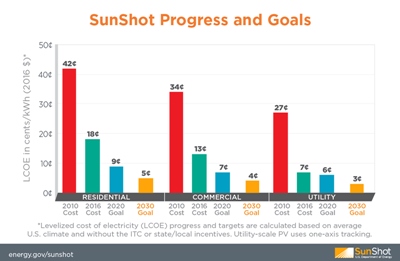 A number of US-based development teams working to commercialize potentially game-changing perovskite photovoltaics technology have won support from the US Department of Energy (DOE).

In the latest round of funding awarded under its SunShot Initiative, the DOE is handing out $46.2 million in support of 48 different photovoltaics projects – with total funding pegged at $65 million when private-sector contributions are included.

The long-term target of the funding is to achieve a levelized cost of solar-generated energy of $0.03 per kilowatt-hour (for utility-scale systems) by 2030.

Established under the Obama administration in 2011, at a time when Steven Chu was US energy secretary, the SunShot initiative also has interim goals for 2020 of $0.06 per kWh for utility-scale PV, and $0.09 per kWh for residential installations. The DOE estimates the current cost of residential and utility PV at $0.18 and $0.07 per kWh respectively.

But whether or not SunShot funding survives budget cuts proposed by the new Trump administration remains to be seen. Overall, the DOE faces a funding reduction of 6 per cent in the presidential request, with the SunShot program expected to be severely impacted.

Perovskite projects
While funding is still forthcoming, however, a number of projects backed in the latest round are focused on developments in perovskite solar materials.

Following rapid improvements in laboratory-based perovskite PV performance in recent years, the big challenge now is to transfer that potential into the commercial realm and scale production to large volumes while maintaining high performance.

The new DOE funding is split into two categories, with $20.5 million for developing next-generation PV technologies and $25.7 million earmarked for supporting entrepreneurs and small businesses.

Among the projects supported in the first category is a $1.37 million effort by Stanford University researchers led by principal investigator Michael McGehee on tandem perovskite-silicon cells. McGehee’s team is aiming to determine the best interconnection design and material properties for each module component, and use modelling to predict outdoor panel performance under realistic spectral variations.

Other projects on the perovskite theme include a Colorado School of Mines effort under Alan Sellinger to develop novel hole transport layers – generally regarded as the most expensive and unstable element of the technology.

Meanwhile Alex Zunger and colleagues at the University of Colorado, Boulder, will look at “double-perovskite” approaches, and a different Stanford group led by Reinhard Dauskart will work on a patterned hexagonal reinforcing scaffold filled with perovskite that is said to mitigate the chemical, thermal, and mechanical degradation issues of planar perovskite solar cells.

Roll-to-roll printing
Included in the “technology to market” funding category is a $2 million effort by Dallas Solar to investigate defect formation in perovskites, with the aim of determining the ideal conditions for commercial scale-up.

Other companies set to receive significant backing include Santa Barbara’s Next Energy Technologies, which has been awarded $2.5 million to integrate organic photovoltaic (OPV) materials with commercial windows.

The biggest winner in the research and development category, in terms of project funding cash, is SunPower. The San Jose firm, which is majority-owned by oil giant Total, is set to spend $1.2 million advancing wire metallization and stringing for back-contact cells.

SunPower’s business is based largely around the conversion efficiency advantages of its Stanford-developed interdigitated back contact (IBC) solar cells and modules, but the technology requires a more complex manufacturing approach than conventional silicon cells.

“This project aims to use newly conceived surface bonding procedures to completely change the approach to cell metallization and interconnection that is used to produce IBC modules, which has the potential to reduce the number of relevant process steps by more than 50 per cent, and significantly reduce the cost of module fabrication,” reports the SunPower team.