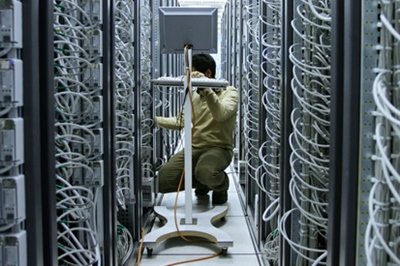 One of eleven similar partnerships announced by the UK government and involving ten different universities, the five-year effort will see Rockley match funding provided by the Engineering and Physical Sciences Research Council (EPSRC), with support for the project set to total £4.8 million.

Among the other winning partnerships is an effort by M-Squared Lasers and the University of St Andrews to develop “ultra-compact” super-resolution microscopes.

Disruptive integration
Rockley says that the focus will be on developing silicon photonics to improve the energy efficiency of high-speed links in data centers, and to support a new “integrated photonics platform” for a broader range of applications.

Founder Rickman previously led Bookham Technology and its silicon-based integrated optics components to a wildly successful initial public offering (IPO) and a brief listing on the FTSE 100 during the optical communications bubble of the early 2000s, before the company made a series of acquisitions and instead focused on compound semiconductor devices amid the subsequent “bust” period.

He set up Rockley in 2013, telling optics.org the following year that the company was working with a European foundry partner on a “multi-micron” sized waveguide technology, in contrast to rival approaches using CMOS-compatible sub-micron structures.

Relationships
The company has since established locations in California and Finland, and at an industry day hosted by Southampton’s Future Photonics Hub last September, Rickman predicted that Rockley’s optical packet switches for data centers should start arriving on the market this year.

He said of the latest ORC partnership: “Rockley Photonics and the University of Southampton team has a long-standing history of working together. Our partnership, built up over many years, demonstrates the value of relationships between academia and commercial enterprises such as ours.

“It gives us the ability to combine resources and academic excellence and focus on ground-breaking, early-stage technologies, such as silicon photonics.

“Research in to this area is progressing quickly, and in the very near future, this game-changing, disruptive technology will soon have a huge impact on the future architecture design of large data centers; improve the power and compute capacity of new consumer devices and provide robust sensing solutions in a variety of industry sectors, such autonomous vehicles and biomedical.

“All this at dramatically lower cost and with considerably less power requirements.”

Energy consumption
Graham Reed, who heads up silicon photonics research at the ORC, described the latest partnership as a mutual relationship between university and industry, adding: “We have a long history of working together and this collaboration is almost the perfect fit for the remit of the prosperity partnerships.”

Reed also pointed out the pressing need to develop technologies capable of handling enormous amounts of data in a more energy-efficient manner.

The partners cite research suggesting that as much as 3 per cent of global electricity is now consumed by data centers, equivalent to more than 400 TWh in 2016 – more than total electricity consumption in the UK last year.

Overall, the latest prosperity partnerships will receive £31 million via EPSRC funding and the UK's new Industrial Strategy Challenge Fund, matched with £36 million from industry partners either in the form of cash or “in-kind” contributions, plus £11 million from university partners.

Another photonics company set to benefit from the scheme is M-Squared Lasers, which is collaborating with the optical manipulation group at the University of St Andrews on the development of a new suite of ultra-compact super-resolution microscopes aimed at pathology and disease management applications.