In 2012, the European Commission launched the 15-member PLAT4M project in 2012 to develop a silicon photonics supply chain in Europe to accelerate industrialization of the technology by enabling its seamless transition to commercial production. The project has now reported its final outputs and the headline conclusions are that the results are “better than expected”.

The main objective of PLAT4M was to advance silicon photonics research foundries and transition the technology to pilot line operation and industrial manufacturing of products based on silicon photonics. The supply chain is based on three different but complementary technology platforms managed by Leti, STMicroelectronics and imec, respectively.

Leti's 8,500m2 clean room facility includes a 200mm pilot line that enables fabrication of passives, detectors, modulators and integrated lasers with a focus on high-bandwidth devices. The project team developed a new silicon photonics platform based on a 310nm silicon film on an 800nm buried oxide (BOX) layer on a high-resistivity silicon substrate. Since the targeted applications for the project were O-band transceivers and receivers, most of the developed devices are suitable for 1310nm operations, says imec.

CEA-LETI has developed three process design kits, which are dedicated to Multi Project Wafer runs on this silicon photonics-based technology, which is now offered via the brokers CMP (Circuits Multi Projects) and Europractice. Moreover, III-V Lab has designed and co-fabricated a modern, integrated hybrid III-V/silicon transmitter using a wafer bonding technique on this platform.

STMicroelectronics, the first 300mm wafer silicon photonics device manufacturer, has been a solution provider for 100 Gbps transceiver products since 2016. In parallel to its industrial activity, during the PLAT4M project ST developed another silicon photonics technology aimed at generating and nurturing further application specific industrial nodes.

In the context of PLAT4M, the participants chose a 4x25G transceiver as a Wavelength Division Multiplexing data-communication demonstrator to validate both LETI and ST R&D platforms. The device functionalities were evaluated for compatibility with the 100GBase-LR4 standard, implying a signal transmission over 4 channels, spaced by 800 GHz around 1310 nm window, one fiber out and one fiber in. 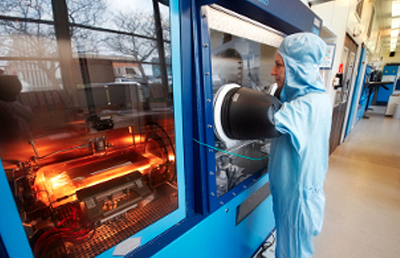 During the PLAT4M project, imec has consolidated and further developed its silicon photonics technology platform ISIPP25G using its 200mm pilot line facilities located in Leuven to support industrial prototyping for various applications and markets. The imec platform component portfolio has been expanded to specific devices for sensing and high power free space applications.

Furthermore, imec's technology is supporting state-of-the-art modulation and detection at 50Gb/s and beyond with a variety of modulator options (GeSi EAM, Si MZM, Si MRM) now offered under its ISIPP50G technology along with both edge and surface fiber coupling technology and a library of O-Band and C-Band high quality passive components.

Using the imec technology with new processing steps, research organization TNO has demonstrated a multi-channel ring resonator based sensor system. On the commercial side, Polytec demonstrated the operation of Multichannel Laser Doppler Vibrometer. Also, Thales has demonstrated an integrated FMCW LiDAR system with 8 switchable output channels, enabling to scanning directions as well as a coherent beam combiner with 16 beams with linear operation up to a maximum input power of 26dBm.

The PLAT4M project has led to a qualitative leap of the design flow for silicon photonics, allowing the photonics community to design more complex and more robust circuits. Mentor and PhoeniX Software have worked closely together on an integrated electronics/photonics co-design workflow. This has been accomplished by building on existing tool-sets wherever possible and developing new technologies when required.

The supply chain includes EDA solutions such as Mentor's Pyxis and Calibre, which were extended to “understand” photonics. Interfaces were developed between these tools and Photonic IC design solution OptoDesigner from PhoeniX Software to create integrated design flows using the best practices from both photonics and electronics design. In addition, process design kit elements were developed for Mentor's Calibre DRC, Calibre LVS, and Pyxis tools, incorporating new components, added models and fabrication information.