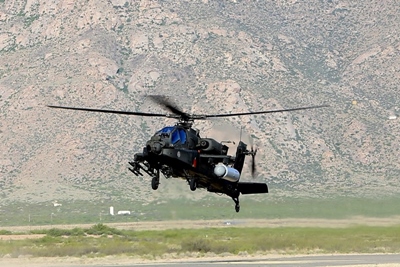 US military contractor Raytheon and the US Army say that they recently completed the successful flight test of a high-energy laser (HEL) system on board an Apache AH-64 helicopter.

The demonstration at White Sands Missile Range in New Mexico is said to represent the first time that a fully integrated laser system has successfully engaged and fired on a target from a rotary-wing aircraft over a wide variety of flight regimes, altitudes and air speeds.

‘Sooner rather than later’
Carried out in collaboration with US Special Operations Command, Raytheon says that the test achieved all primary and secondary goals, providing “solid” experimental evidence for the feasibility of beam propagation required for an HEL attack, as well as high-resolution, multi-band sensor performance.

“Additionally, the system performed as expected while tracking and directing energy on a number of targets,” reports Raytheon. “The design of future HEL systems will be shaped by the data collected on the impact of vibration, dust and rotor downwash on HEL beam control and steering."

Art Morrish, VP of advanced concept[s] and technologies for Raytheon’s space and airborne systems division, said in a company release: “This data collection shows we're on the right track. By combining combat proven sensors with multiple laser technologies, we can bring this capability to the battlefield sooner rather than later.”

For the helicopter demonstration the collaboration coupled a multispectral targeting system (MTS) with a high-energy laser. The MTS provided targeting information, situational awareness and beam control.

In the Navy
News of the helicopter test came on the same day that the Department of Defense announced that both the US Army and the US Navy are increasingly incorporating laser weapons on a limited number of platforms and training exercises.

Matthew Ketner, branch chief of the High Energy Laser Controls and Integration Directorate at the Naval Surface Warfare Center Dahlgren Division, Virginia, said during a “lab day” held at the Pentagon last month that while the 30 kW laser on board USS Ponce had been tested “extensively”, and is authorized for defensive use.

Meanwhile the Army is testing lasers designed to bring down unmanned aerial vehicles (UAVs). Earlier this year, the US Army Space and Missile Command is said to have shot down a number of UAVs with a 5 kW laser mounted on a Stryker armored vehicle - during the so-called “hard kill challenge” event also held at White Sands.

According to the DoD release Ketner said that, so far, lasers have demonstrated the ability to "take out" cruise missiles, mortars and other projectiles during testing.