New Oslux design combines a cool-white and warm-white emitter under a single lens. 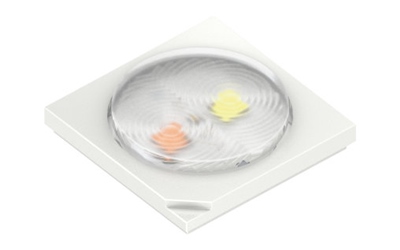 LED manufacturer Osram Opto Semiconductors says it has come up with a completely new module for mobile camera flash applications that combines two different white-light emitters under a common lens.

Customer benefits
“In video lights and camera flash applications, the integration of two LED chips and a silicone lens on one PC board offers clear benefits for the customer,” states the Regensburg firm, part of the sprawling global lighting business.

“Now no separate step is necessary for optimum positioning of the lens,” it added. “This does not only save time but also optimizes the use of the generated light.”

One unsurprising downside of the new multi-chip design is that it takes up more space than other approaches. Although only 1.15 mm deep, it measures 5 mm x 5 mm in terms of area. However, Osram OS points out that the exposed aperture is smaller than would be the case with two separate LEDs, and that the silicone lens employed means the module can be reflow-soldered in a standard manufacturing step.

The Oslux S2.1 is already available, but Osram OS is planning to release an additional version early next year featuring an epoxy lens. “Thanks to this extremely hard material, the Oslux S2.2 can be installed in mobile devices without a separate protective window, which provides additional industrial design options,” it explains.

In addition to that, a “spectrum optimized converter” will provide the Oslux S2.2 with even better photos, states the firm.

“Selfie” tech requirements
With its release of the Oslux S2.1 module, Osram OS will be looking to challenge Lumileds, which has long claimed to be the market leader in camera flash applications of LEDs.

Lumileds already uses spectrum optimization to provide high color rendering and white balance in photos captured by camera phones, with its “Luxeon Flash” modules said to be used by all major smartphone OEMs.

In the age of the “selfie”, Lumileds says that particular attention needs to be paid to the effects of glare caused by the flash while taking account of rapid advances in CMOS sensor development.

“As the person taking the picture needs to closely look back at the phone and screen to check the settings, the torch and flash light can cause discomfort in some cases,” its development team wrote in a white paper published last December.

In front-facing smartphone cameras, which typically use sensors with a 1.4 µm pixel size, Lumileds says that a flash needs to deliver an illuminance of 100 lux to provide a good signal-to-noise ratio of 36 dB.

“With 0.5 meter distance between the camera and the subject (for the taking of a “selfie”), the necessary flux from the flash is about 80 lm for the typical broad field-of-view of 80° to 85°,” adds the team.

What that translates to is a pulse length of less than a quarter of a second – to reduce glare to an acceptable level – meaning that the LED used for the front-facing camera flash must support high currents of around 1 A to deliver sufficient light intensity in a short pulse.