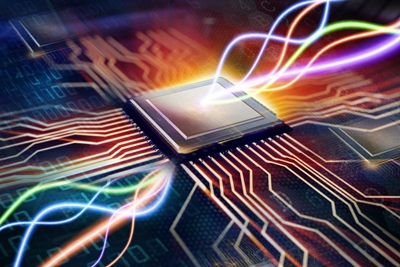 The US Department of Energy’s threatened Advanced Research Projects Agency (ARPA-E) is investing $25 million in nine different photonics-driven efforts to improve the efficiency of data centers.

Dubbed “ENergy-efficient Light-wave Integrated Technology Enabling Networks that Enhance Datacenters (ENLITENED)”, the program of work under program director Michael Haney is intended to develop technologies to help reduce energy consumption in the data centers – now said by ARPA-E to be responsible for 2.5 per cent of all US electricity.

With the proliferation of cloud computing services, that figure is expected to double in just eight years, while current efforts to improve energy efficiency will ultimately be limited by the metal interconnects used to transmit information at the chip level.

“If successful, ENLITENED projects could result in an overall doubling in data center energy efficiency [in ten years].”

Project details
The nine projects include several aimed at developing silicon photonics and chip-scale modules designed to replace traditional electronic interconnects. Most of the efforts are led by university teams, with the University of California featuring particularly prominently - and IBM’s T.J. Watson Research Center heading up two of the projects.

Full details of the nine different research projects can be found on the ARPA-E web site here (as a downloadable .pdf file)

Trump budget threat
The funding comes as the future of the ARPA-E effort – created in 2007 as an energy-focused analog of the successful, military-led Defense Advanced Research Projects Agency (DARPA) – appears to be in serious jeopardy. Last month, the Trump administration’s presidential budget request indicated zero funding for ARPA-E in fiscal year 2018, amid wider cuts to science spending.

However, a new assessment by the US National Academies of Sciences, Engineering, and Medicine reported earlier this week that the agency was making progress towards achieving its mission, even if the impact of research it has funded will likely not be felt for several years.

The congressionally mandated report, sponsored by ARPA-E itself and the philanthropic Alfred P. Sloan Foundation, concludes:

“ARPA-E is in many cases successfully enhancing the economic and energy security of the US by funding transformational activities, white space (technology areas that are novel or underexplored and unlikely to be addressed by the private sector or by other federal research programs), and feasibility studies to open up new technological directions and evaluate the technical merit of potential directions.”

"Tech-to-market" challenge
However, it also recommends that the ARPA-E director and program directors develop and implement a framework for measuring and assessing the agency's impact in achieving its mission and goals as soon as practicable, providing the agency with greater ability to demonstrate its value and impact.

In addition, the so-called “tech-to-market” program, designed to provide researchers with business and other non-technical support and advice, should be “re-conceptualized”.

“The agency considers this program to be an ongoing experiment, and the challenge of developing such a program may be greater than originally thought,” states the report. “The roughly three-year time frame of an ARPA-E project is too short to expect a technology to move from concept to market.”

In conclusions penned by report committee chair Pradeep Khosla and colleagues, it is recommended that ARPA-E “reconfigure” the program to account for the wide variation in support needed across programs and performers with respect to prospective funding, commercialization, and deployment pathways.

“For example, ARPA-E should consider making full tech-to-market plans optional, but requiring performers to describe potential product applications if they can prove technological feasibility,” they added.

The complete ARPA-E assessment is available at the National Academies web site here.