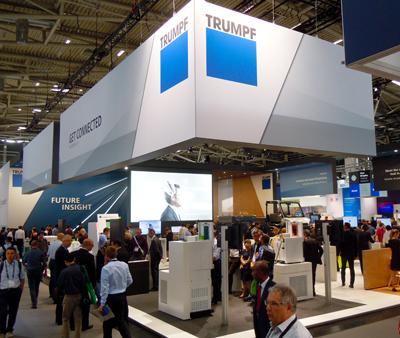 Trumpf has this week unveiled a range of new lasers and systems, which have been demonstrated on its substantial exhibition stand at LASER World of Photonics in Munich.

The TruDiode 4001.5 is a 4 kW direct diode laser offering a beam quality of 5 mm mrad, enabling it to be connected to a laser light cable with a core diameter of 150 µm. It is based on Trumpf’s new, patented technology known as Dense Wavelength Multiplexing (DWM).

Stefanie Feuchtenbeiner, part of the TruDiode product management team, said, “By way of comparison, commercially available direct diode lasers in the high-power segment typically have beam qualities of between 30 and 50 mm·mrad and are used with a 600 µm laser light cable.

”To increase the output, multiple emitters are grouped into diode bars. To generate output power in the multi-kilowatt range, the current method is to spatially combine the beams from multiple diode bars and apply spectral multiplexing only to a limited extent. One of the results of this approach, however, is low beam quality.

“Using the new DWM technology, we can generate a multiplexed laser beam of high quality by combining the outputs from individual diodes. We use diodes that emit at different wavelengths. The light from the diode emitters is focused onto a diffractive optical element which combines it into a single laser beam.”

A new Trumpf laser designed for scientific research is the Dira 200-5, which delivers picosecond pulses with up to 200 mJ pulse energy – the highest pulse energy rate extracted from a regenerative amplifier available, explained its inventor Catherine Yuriko Teisset. 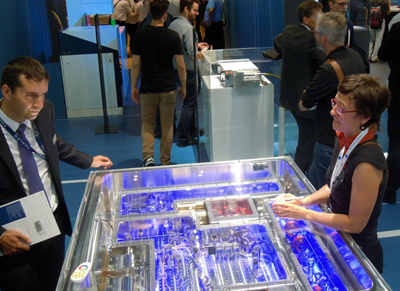 “This product portfolio covers the repetition range from one to a few hundred kilohertz. The flexible design of the Dira series allows for the customization of systems according to a user’s requirements. Applications are in areas such as spectroscopy, attosecond research and in industrial inspection, such as for the semiconductor industry,” she said.

Trumpf Scientific Lasers was founded in May 2012 as a joint venture between Trumpf Group and Prof Ferenc Krausz, executive director of the Max Planck Institute of Quantum Optics in Garching and professor of physics at Ludwig Maximilians University, Munich.

The TruDisk range of high power disk lasers has been extended with the 4001 and 6001 models. Product manager Sebastian Zaske told optics.org about the new systems. “The disk laser is surely our most important laser,” he said. “We sell these as an OEM device and we also use them in our own 2D and 3D materials processing systems.”

“These new models are different because they are more compact – both have a footprint of 0.85 square meters; they also have improved sensor performance and data management systems with better access to cloud storage and support for Industry 4.0 management systems.” 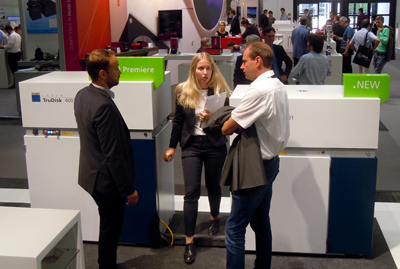 To improve the performance of these disk lasers in extreme climate environments the cooling systems have been modified. The 4001 model features an integrated chiller so that the onboard cooling system will function even if the external water supply for the heat exchanger gets as warm as 38C. Both models are also able to deal with dirty cooling water, meaning that these lasers can cope much better with adverse operating conditions, Zaske explained.

The new TruMark 6030 is claimed to shorten process times by up to 25 percent. Pulse energy and average power on the work piece is boosted to 25W. This marking laser is fitted with an ytterbium beam source for the first time. Spokesman Thomas Weidner explained, “This offers outstanding beam quality and high power densities, enabling the laser to achieve clean ablation and high-contrast marking.”

Marking 3D parts previously required the use of indirect methods. But the new TruTops Mark 3.0 marking software changes this. Based on a 3D CAD marking system, the TruMark 6030 can deal with 3D surfaces on complex parts, because it can shift the focus point along the z-axis by up to 50 mm, meaning even marking on complex curved surfaces.