Applications panel in Munich looks at ways to improve diagnostic capability of endoscopy. 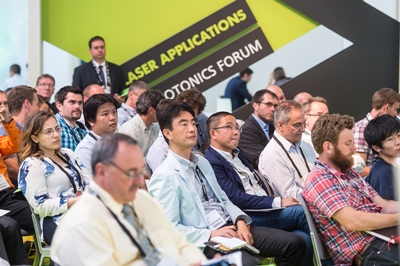 Those were among the key messages presented at an applications panel focused on advances in photonics for clinics and hospitals at this week’s LASER World of Photonics trade show in Munich.

Opening the session Maximilian Waldner, a gastrointestinal (GI) tract endoscopy specialist from the medical department at Universitätklinikum Erlangen, said that the majority of endoscopies performed today are little-changed from the very first procedure carried out way back in 1868.

Although conventional white-light endoscopy is useful for diagnosing inflammation, pre-cancerous growths, and tumors, it is also extremely limited, meaning that missed tumors, misidentification of growths, and unnecessary biopsies and treatments are all inevitable.

Pointing out that of the 70,000 new colorectal cancer patients diagnosed in Germany every year, nearly one-third are already at an advanced stage of the disease, he told the applications panel audience that lots of early-stage cancers are missed, with approximately 8 per cent of cancers going undetected.

“We need better, and faster identification of suspect lesions,” Waldner said, adding that the “ideal” technique would be able to provide in vivo histopathology for real-time cancer detection and treatment.

Unfortunately, attempts to improve endoscopy with approaches like high-definition imaging or fluorescence techniques have shown little improvement to overall diagnostic success. That is partly because each individual technique has a drawback: some are highly specific but slow; others are fast but demand the use of additional dyes or labels that complicate the already expensive regulatory process.

The answer, it appears, is to adopt “multimodal” approaches based on combinations of photonics techniques, which Waldner described as the most promising.

CARS and two-photon techniques
Taking up that theme Jürgen Popp, from the Leibniz Institute of Photonic Technology in Germany, pointed out that the additional complexity of multimodal approaches demanded sophisticated approaches to chemometrics and image analysis, in order to present a diagnostically useful “result” to clinicians unfamiliar with the kind of spectral output a Raman or multi-photon probe would deliver.

The ideal endoscope would be fast, compact and non-invasive, and combine chemical sensitivity with the ability to show morphology without the need for any labels.

In theory, that can be delivered with a combination of the right photonics techniques. Popp highlighted the relatively simple nature of coherent anti-Stokes Raman spectroscopy (CARS), which yields an intense Raman signal showing the distribution of lipid content in tissue – something that correlates extremely well with tumor locations.

And CARS can be combined with second harmonic generation (SHG) techniques able to show morphology by highlighting the presence or absence of collagen tissue – indicating the boundary of tumor growth.

With a combination of CARS, SHG and two-photon excitation microscopy (TPEF), the probe has proved itself able to image tumor islands and borders, identifying them partly through the “missing” collagen tissue destroyed by a cancerous growth.

The hard part, Popp said, was taking all that rich spectral and morphological information and “downsampling” it to generate a clear diagnostic message that clinicians like Waldner can work with.

So far, it appears to work well: ex vivo studies on more than 200 patients in three hospitals showed that the triple-mode probe delivered a clinical accuracy of more than 90 per cent, and Popp believes that this figure will be improved with self-learning algorithms.

The next steps are to build a fiber-based probe for in vivo diagnoses, with Popp even suggesting that in the longer term a femtosecond laser could be attached to the diagnostic system, and used to cold-ablate suspicious lesions as and when they are discovered by the multimodal endoscope.

Other promising combinations suggested by Popp include Raman with fluorescence lifetime imaging microscopy (FLIM), offering the tantalizing prospect of specific molecular identification with the speed of FLIM.

The business case
For all the promise of such technologies, Toptica’s Patrick Leisching warned that finding the right business case for the probes to be deployed effectively remains a big challenge.

Looking at the finances of Mauna Kea Technologies and OptiScan, two companies that have taken on the endoscopy world with optical biopsy techniques, Leisching noted that both have had to soak up accumulated losses of around the $50 million mark, largely to overcome regulatory hurdles.

However, for healthcare systems the payback from earlier diagnosis of cancers and therefore cheaper treatment options could be enormous. Looking at ear, nose and throat (ENT) cancers, some of the most obviously accessible to optical techniques, he calculated possible annual savings of €100 million in Germany, where around two-thirds of the 16,000 ENT cancers detected each year require treatment costing around €100,000 per patient.

An effective optical biopsy could cut that proportion to just one-third, reckons Leisching, with the prospect of a much better prognosis for thousands of patients who could then receive treatment costing only around €5000 each.