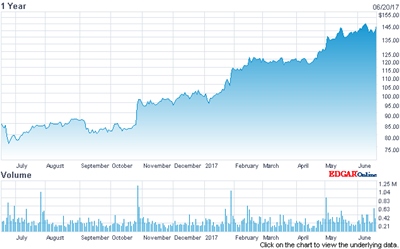 The move comes less than a month after the fiber laser giant confirmed that it was also buying Orlando’s Optigrate, with both deals reinforcing IPG’s vertical integration strategy.

“ILT’s expertise in producing high-precision laser-based systems will accelerate IPG’s ability to deliver best-in-class standardized and turnkey systems solutions to the medical device industry and other key end user markets,” announced the Oxford, Massachusetts, firm, adding that the deal should be completed early next month.

Medical devices
With approximately 60 employees, ILT is said to have posted revenues of around $22 million for the fiscal year ended December 31, 2016. It is currently owned by a Milwaukee-based private equity firm, in the form of Generation Growth Capital Fund II, L.P.

Primarily aimed at producing components for the medical device industry, ILT’s systems are said to offer customized machine engineering, laser application design and integration services, and full post-integration support. IPG says it has supplied significant numbers of lasers to ILT over the past few years.

A critical element in the systems is ILT’s proprietary “HMI-2200” control software, which has been qualified for medical device manufacturing. The software is said to enable seamless data collection and transfer between customers’ manufacturing execution systems (MES) and laser equipment.

IPG’s founder and CEO Valentin Gapontsev said of the deal: “ILT has a proven track record producing leading-edge systems for medical device manufacturers, one of the fastest-growing markets for fine welding and cutting applications.

At $40 million, the acquisition price makes only a minor dent in IPG’s fast-growing cash pile. As of early May, the highly profitable fiber laser firm listed close to $700 million in cash and cash equivalents on its balance sheet.

Following news of the ILT deal, IPG’s Nasdaq-listed stock rose in value by around 3 per cent to close at just over $144 – near the all-time high of $146.49 set earlier this month, and equivalent to a market capitalization of $7.75 billion.