Diamond-like crystal reflects many light wavelengths in all directions

Novel material developed at U Twente is candidate for a back reflector in solar cells, on-chip lasers, invisibility cloaks. 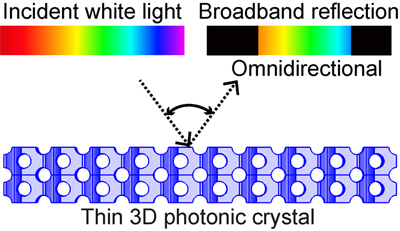 Physicists and mathematicians at the University of Twente, Netherlands, have discovered that a novel, thin, diamond-like photonic nanostructure reflects an unexpectedly broad range of colors of light, from all angles.

This effect causes the material to have great potential as a back reflector to enhance the efficiency of solar cells or tiny on-chip light sources. The results have just been published in Physical Review B in a paper entitled Reflectivity calculated for a three-dimensional silicon photonic band gap crystal with finite support .

The efficiency of solar cells depends on trapping and absorbing light and can be increased by using a back reflector: a mirror behind the solar cell material that reflects light that was not absorbed and leads it back into the solar cell. The ideal mirror reflects light incident from any angle, known as omnidirectional reflectance, and for all frequencies of light.

Such reflectance for dielectric structures is associated with three-dimensional photonic crystal nanostructures that sustain a so-called complete photonic band gap. However, researchers have long believed such structures would have a narrow frequency range of operation and their omnidirectional behavior has never been demonstrated to date. 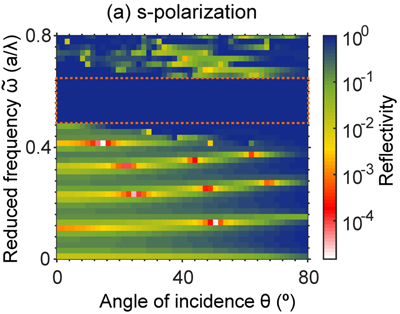 Calculated reflectivity spectra for all orientations of incident light.

"These crystals consist of regularly ordered array of pores drilled in two perpendicular directions in a wafer of dielectric such as silicon. The crystal structure is inspired by diamond gemstones."

The researchers studied the reflectivity of the cubic diamond-like inverse woodpile crystals by numerical calculations and interpreted recent experiments. They employed the finite element method to study these crystals surrounded by free space.

"We found that even very thin inverse woodpiles strongly reflect many colors of light omnidirectionally”, added Devashish. “In inverse woodpiles, the absorption of light is negligible. This makes them a great candidate as a back reflector in solar cells. We also expect these diamond-like photonic crystals may lead to on-chip lasers, invisibility cloaks and devices to confine light in extremely small volumes.”

The researchers observe that light for a broad range of colors is always reflected for any angle of incidence and for both orientations, even for a thin crystal slab. The dark blue color represents high reflectivity that occurs in the stop band for all angles. The white color represents near 0% reflectivity. The orange dashed lines highlight the broad frequency range where light is reflected for all incident angles.