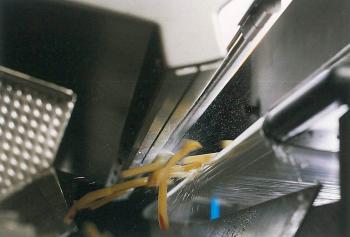 A molecular spectroscopy technique developed at VUB B-PHOT, the Brussels Photonics Team of the University of Brussels, could help to spot the early signs of elevated acrylamide levels in potatoes, tackling a current concern in food hygiene.

Acrylamide is formed when foods rich in starch are cooked for too long, and since January 2017 has been the subject of a campaign by the UK's Food Standards Agency to raise awareness among consumers of the dangers of overcooked toast, among other staples.

The technique developed by B-PHOT's Lien Smeesters scans peeled potatoes before they move forwards into the food manufacturing process, weeding out those that may cause high levels of acrylamide when subsequently cooked.

In collaboration with Tomra Sorting Solutions, the technique will be incorporated into a sorting operation for French fries, identifying the items to be removed while they are in free fall, and doing so without the need for added chemicals or dyes.

An infrared laser scans the falling chip from both the front and rear sides, and detects the characteristic molecular fingerprint of elevated levels of acrylamide precursors in the light which emerges from the potato after internal scattering. Having been identified in mid-air, a directed jet of air removes the sub-standard item from the stream.

"Not all potatoes result in excessive acrylamide formation during frying," commented Smeesters. "We have sought to spot the undesirable potatoes when they are in their raw, peeled stage. After scanning with laser beams, the good potatoes will emit a different light signal than the unsuited ones leading to an unambiguous detection."

Home testing in the kitchen

Smeesters recently received the European Innovation Award 2017 during the annual meeting of Photonics 21, in recognition of her work on the use of optical spectroscopy for the detection of carcinogens in food products, and for the potential impact of the research. Her work was also nominated for the Edmund Optics Educational Award in 2016.

Previous research by B-PHOT in this area, including Smeesters' doctoral thesis, had demonstrated the potential value of molecular spectroscopy in identifying contaminants such as mycotoxins - poisons produced by toxic fungi - in different foods. A case study investigated the use of fluorescence techniques, in particular one- and two-photon-induced fluorescence spectroscopy, as a means to spot aflatoxin in individual kernels of maize, an operation that needed to accommodate the natural fluorescence of proteins in maize as well as the variations in density and texture of the material under analysis.

The new contactless operation for potatoes could ultimately lead to an operation suitable for domestic use, making it available to users in the kitchen.

"Although we are a long way off this yet, the miniaturization of the technology would enable a compact potato quality test tool in your home," said Smeesters. "A hand-held device indicating whether a potato would be unsuited for frying could reduce our exposure to acrylamide."