Speed, precision and safety improved by new process based on a disc laser for torch cutting. 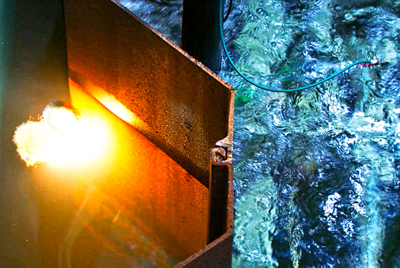 Performing industrial or engineering tasks under water is especially personnel- and time-intensive. Laser Zentrum Hannover (LZH) is therefore working on developing a laser-based, automated process for cutting sheet piling under water, in conjunction with the Institute of Materials Science of the Leibniz Universität Hannover.

Sheet piling typically protects fortified shore areas, or it can also be deployed to dry out these areas if repairs are necessary. If the sheet piling needs to be dismantled, divers have to cut the walls into smaller pieces using a cutting torch. Normally, a diver can cut about 20 meters a day, which corresponds to a speed of about 0.07 meters per minute.

In the project LuWaPro, scientists at the LZH have now developed a process which uses a disc laser for torch cutting. The divers thus only carries out a supervisory role. The process can be used to separate the metal sheets, which are usually 10 mm thick for sheet piling, at speeds of up to 0.9 m/min.

Poor visibility, currents or uneven surfaces make working underwater more difficult and dangerous for the divers. The scientists of the Underwater Technology Group have achieved a position tolerance of about two millimeters in their process, enabling the system to react robustly to possible impacts during underwater operation.

The process whas been tested with two scenarios: on the one hand, standalone metal sheets were cut underwater, on the other hand, the sheets were backfilled with concrete. In the second scenario, a leaking of the molten material through the cutting kerf is achieved by tilting the laser head at an angle of 20 degrees.

LZH comments that a further major advantage of the new process in comparison to the conventional hand-guided process is the possibility of closely monitoring the process. Sensors can reliably determine whether a cut is completed or not. Otherwise the diver often cannot see this due to the poor visibility underwater.

The laser safety necessary for this process can be assured if the diver wears conventional safety goggles under the safety helmet. The project, entitled “Laser cutting under water for high productivity – LuWaPro” has been supported by Germany's Federal Ministry for Economic Affairs and Energy.