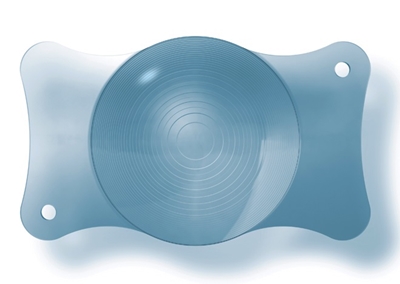 Seen as a fast-growing sector of the medical optics market as the global population ages and advanced cataract treatment becomes more popular, the “trifocal” lenses developed by the company enable patients to focus at near-, mid-and long-distance.

Trifocal technology
The Zeiss affiliate - the optics and microscopy giant remains a long-term majority shareholder despite last week's capital raise (see below) - had brought a case against rival vendor VSY Biotechnology and its exclusive supplier Fritz Ruck Ophthalmologische Systeme, over the technology described in the European patent EP 2377493 B1.

It covers a particular kind of trifocal IOL, which is said to reduce the impact of pupil shrinkage and lens eccentricity.

Zeiss says that the district court agreed with Zeiss’ complaint that the trifocal IOL offered by VSY and Fritz Ruck infringed the intellectual property, which describes how grating pitches can be used to ensure more effective multi-focusing ability in patients treated.

The Jena firm added that VSY and Fritz Ruck had been ordered to recall all their trifocal lenses on the market, and to destroy all such lenses in their possession.

“Trifocal intraocular lenses such as the Zeiss AT LISA tri and the AT LISA tri toric, which are highly esteemed by physicians, enable patients to see well at all distances – often without them needing eyeglasses,” says the company.

CEO Ludwin Monz responded that he was "delighted" with the level of demand for the new shares, adding:

"The realized proceeds will provide us with the necessary firepower and flexibility to selectively exploit opportunities in our markets and to sustainably accelerate our growth. We would like to thank our new and existing shareholders for the high level of trust."

Prior to the new issue, Monz had said that Zeiss Meditec saw "significant opportunities" in both the short and medium term to accelerate its rate of growth through selective acquisitions.

"A number of projects in different size brackets are being considered," added the CEO.

Parent company Zeiss did not take part in the new issue, meaning that the proportion of "free floating" Meditec shares has increased from 35 per cent to 41 per cent.

Last month Meditec reported currency-adjusted sales growth of just over 5 per cent in the opening quarter of its 2016/17 financial year, to €280 million.

Monz said at the time that the rate of growth had been particularly strong in China, while sales in Europe were hit by a sharp decline in UK business.

• Update (March 30): VSY says that it is opposing the Carl Zeiss Meditec patent in question, which it says the German firm acquired from the consultancy company IP Strategists GmbH - who in turn had acquired the patent from the Japan-headquartered Menicon Co.

"VSY is of the opinion that EP’493 does not fulfil the requirements of patentability as it lacks novelty and inventive step, is insufficiently disclosed and includes extension of subject matter," said the Amsterdam-based company. The opposition is still pending, adds VSY. Full details (in German) can be accessed here.