Lockheed Martin to deliver ‘record-setting’ 60kW laser to US Army

Beam-combined fiber laser is the most powerful laser of its type yet demonstrated; now to be truck-mounted. 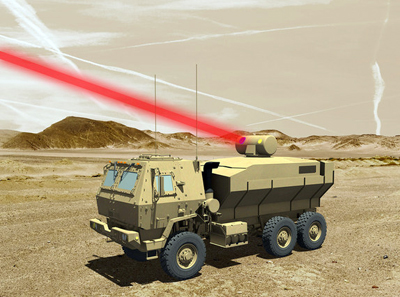 Defense and aerospace engineering giant Lockheed Martin has completed the design, development and demonstration of a new 60 kW-class beam combined fiber laser for the US Army, as was first reported in February in Show Daily at SPIE’s Photonics West 2017.

In testing earlier this month (March), the laser produced a single beam of 58 kW, representing a world record for a laser of this type, the company claimed. The Lockheed Martin team met all contractual deliverables for the laser system and is preparing to ship it to the US Army Space and Missile Defense Command/Army Forces Strategic Command in Huntsville, Alabama.

"This milestone could not have been achieved without close partnership between the US Army and Lockheed Martin; we are pleased to be able to deliver this system for their further integration and evaluation," Hartley added.

The high-energy source is a beam-combined fiber laser, meaning it brings together individual lasers, generated through fiber optics, to form a single, intense beam. This allows for a scalable laser system that can be made more powerful by adding more fiber laser subunits. The laser is based on a design developed under the Department of Defense's Robust Electric Laser Initiative Program, and further developed through investments by Lockheed Martin and the US Army into the 60kW-class system.

"The inherent scalability of this beam combined laser system has allowed us to build the first 60kW-class fiber laser for the US Army," said Robert Afzal, Ph.D., senior fellow for Laser and Sensor Systems. "We have shown that a powerful directed energy laser is now sufficiently light-weight, low volume and reliable enough to be deployed on tactical vehicles for defensive applications on land, at sea and in the air."

According to Afzal, the Lockheed Martin team has created a laser beam that was near diffraction-limited, meaning it was close to the physical limits for focusing energy on a single, small spot. The laser system has also proved to be highly efficient in testing, capable of translating more than 43% of the electricity that powered it directly into the actual laser beam it emitted. This high efficiency is critical for enabling management of the waste heat produced by the lasing process.

Lockheed Martin commented that laser weapons are now providing a complement to traditional kinetic weapons in the battlefield: “In the future, they will offer reliable protection against threats such as swarms of drones or large numbers of rockets and mortars. In 2015, the company used a 30kW fiber laser weapon, known as ATHENA, to disable a truck from a mile away.”

The company has been developing laser weapon systems for more than 40 years, making advances in precision pointing and control, line-of-sight stabilization and adaptive optics – essential functions in harnessing and directing the power of a laser beam – and in fiber laser devices using spectral beam combining. Lockheed Martin says it intends to develop a family of laser weapon systems capable of various power levels tailored to address missions across sea, air and ground platforms.