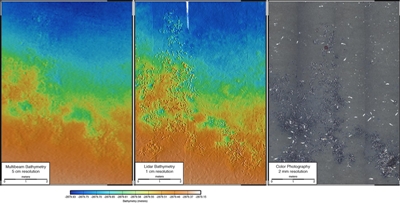 Ultimately intended for sea-floor mapping with autonomous ROVs (remotely operated underwater vehicles), the advanced mapping system is wanted for surveying oceanic changes and is expected to lead to new understandings of processes occurring at the ocean floor.

Centimeter resolution
The two partners have already been collaborating for a while, with MBARI first testing the company’s “SL1” lidar technology back in 2013. They incorporated the laser-based sensor into an ROV-mounted, low-altitude survey system that also included stereo cameras, strobe lights, multibeam sonar, Doppler velocity log sonar, and an inertial navigation system.

That system was able to deliver 1-centimeter resolution topography alongside color photographic imagery over 80 m by 80 m areas in single ROV dives, says the firm.

Early tests also included investigation of clams nearly 3 kilometers below the ocean surface in Monterey Canyon, demonstrating that the bathymetric lidar – using blue-green wavelengths to penetrate water - could resolve individual animals and the trails left by their movements.

More recently, low-altitude surveys have been used to map sponges on the summit of Sur Ridge, and to monitor fine-scale changes to the seafloor in Monterey Canyon as part of a wider study of sediment transport down the active canyon.

Following tests with a prototype, MBARI and 3D at Depth say they have now defined the requirements for efficient 1 cm-scale swath mapping in the deep ocean, and will proceed with the development of a subsea lidar system that is able to meets the requirements.

Initial testing of the new lidar equipment will be as part of the ROV-mounted survey system, but ultimately MBARI is intending to field the low-altitude survey capability on autonomous platforms.

“Our desire to achieve 1 cm-scale surveys of areas with complex and rugged terrain requires generating precise bathymetry over ranges from 2 m to 20 m, while our need for efficient use of expensive platforms requires a scan rate and a field of view comparable to other swath mapping sensors.”

He added that achieving such performance with a lidar scanner will lead to “fundamentally new” observations in the deep ocean.

Carl Embry, the CEO of 3D at Depth, added: “The project is truly a win-win for both organizations as it provides MBARI with a tool to meet their scientific goals and this helps us accelerate the development of our next-generation subsea lidar systems for moving autonomous underwater vehicles (AUVs) and ROVs.”

In its latest technology roadmap, MBARI states that every technological advance that has increased the resolution of sub-sea depth measurements has produced “startling” new perceptions of the sea floor and the processes shaping it.

Ultimately, MBARI wants to combine centimeter-scale bathymetric data with optical imagery, saying: “This new level of resolution is necessary to elucidate geological processes as well as to provide a clear physical framework to observe and understand the distribution, movement, and relationships of benthic (i.e. sea-bed) fauna.”

News of the collaboration comes just a few months after 3D at Depth showed the power of subsea lidar for the energy industry, when its scans were used in conjunction with additive manufacturing techniques to fix a well head in deep water off the coast of Australia.

#MBARI's researchers are conducting seafloor surveys in #MontereyCanyon as part of a large-scale experiment https://t.co/REBlHfxpgN pic.twitter.com/Z9IzcfsAMM

MEMS sensors
Bathymetric lidar - which uses blue-green rather than the more traditional infrared lidar wavelengths to penetrate through water much more effectively - is a relatively old idea, but has tended to rely on bulky lasers that have meant systems weighed up to 300 kilos.

According to the US Geological Society the technology remains highly specialized, with only a handful of systems in existence, most of which are only used in shallow coastal waters.

Other bathymetric system providers include Leica Geosystems, whose “HawkEye III” airborne platform is able to collect sea-floor data from the air, but only to a depth of 50 meters.

3D at Depth says that its SL1 sensor hardware integrates a unique optical design with a sub-nanosecond pulsed solid-state laser to generate the underwater imagery. The systems include an embedded MEMS motion sensor used to calibrate for pitch and roll, meaning that it can be “levelled” despite the motion of the ocean.

SL1 weighs nearly 41 kilos out of the water but is able to operate at depths of up to 3 km, while the newer SL2 version of the equipment is significantly lighter but only operates to 1.5 km depths.