Finisar slips back as outlook disappoints 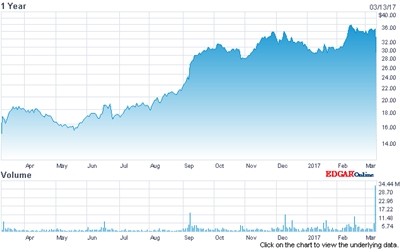 Optical component maker Finisar has shed nearly a quarter of its stock-market valuation, after investors reacted to weaker-than-expected profits and outlook.

Despite posting record third fiscal quarter sales of $380.6 million the California-headquartered producer of photonics parts used across the optical communications sector slipped back 23 per cent following the March 10 earnings release.

100G boom
Like its peers in the optical communications business, booming sales growth at Finisar is currently being fueled by demand for “100G” transceivers for deployment in data centers used to handle cloud-based internet services.

Evidencing that demand, Finisar reported a 110 per cent year-on-year rise in sales of 100G transceivers for datacom applications, with CEO Jerry Rawls telling investors that the strong momentum should continue into the current quarter.

However, weakening demand in China and annual cuts in the selling prices of telecom components and subsystems is expected to drag on sales, with Rawls and his executive team forecasting that revenues will come in at between $360 million and $380 million next time around.

Beyond the next quarter, however, prospects remain strong, with the CEO saying: “We are optimistic about fiscal year 2018. We believe our revenues will grow again starting from the first quarter.”

As well as continued growth from the sales of 100G transceivers, mostly for hyperscale data centers, Rawls is – along with bosses at several of Finisar's rivals – anticipating a big ramp in demand for vertical-cavity surface-emitting lasers (VCSELs) for the emerging 3D sensing market.

3D sensing and VCSELs
With plenty of long-standing expertise in VCSEL production at its fabrication facility in Allen, Texas, Rawls told investors that the company has already shipped “many thousands” of high-powered VCSEL arrays for the new application, and is adding capacity in expectation of a production ramp in the second half of 2017.

Lumentum and II-VI are among the other VCSEL producers targeting the same opportunity, believed to have been prompted by a major mobile device OEM – perhaps Apple or Google - looking to adopt 3D sensing to provide augmented reality (AR) functionality in a new handset.

Rawls expects the opportunity to be worth “tens of millions of dollars” to Finisar over the course of the company’s next fiscal year, adding: “[There’s] huge potential for a lot of people in the industry. We are adding capacity, we're hiring people, we're adding equipment, we are increasing our capacity very dramatically.”

Unlike some of its rivals, Finisar has decided to continue making its VCSELs on a 4-inch diameter wafer platform as it ramps production, rather than switching to a larger format. “We think our yields are higher on 4-inch wafers than they would be if we were processing 6-inch wafers,” Rawls explained. “And so we made a very conscious decision to stick with 4-inch. VCSEL wafers are very thin and very fragile.”

Market has ‘legs’
The veteran CEO added that, so far, demand for VCSELs in immediate 3D sensing applications is dominated by a “very few” customers. “The number of [near-term] prospects and the number of projects that we're working on don't have a lot of demand yet, but where we’re supplying prototypes, samples, small volumes, for testing and for the building of systems, there are dozens and dozens of customers that are in that bag,” Rawls said.

“It's obviously a market that's growing; we think [it] is going to have legs. The real question is going to be what are the apps that people are going to write once they have this ability to do precision 3D sensing?”

While Finisar is not in the business of writing those apps, Rawls expects programmers to be “turned loose” in the near future as they look to exploit the new capabilities, with long-distance facial recognition one possibility.

“There's a lot of excitement generally in the people that are working in this field,” he told Finisar’s investor call. “And if any of their estimates in the future come through, there aren't enough VCSELs capacity in the world to take care of this.”