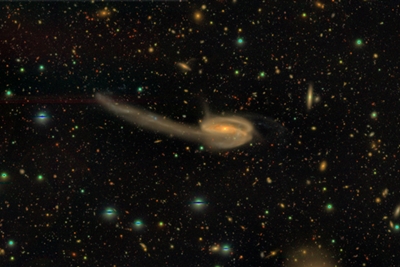 The National Astronomical Observatory of Japan (NAOJ) has released the first public dataset of images captured by the Subaru Telescope’s “Hyper-Suprime-Cam”.

Built during the 1990s on Mauna Kea in Hawaii, the 8.2 meter-aperture Subaru Telescope has a particularly wide field of view (FOV), making it ideal for surveying large swathes of the night sky.

In combination with the Hyper-Suprime-Cam (HSC), essentially a giant digital camera based around an 870 megapixel imager made from an array of more than one hundred Hamamatsu CCD sensors, Subaru has been conducting an extensive survey since 2014.

Although individual images have previously been released by NAOJ, this is the first time that such a large dataset has been made available to the public. It includes data captured during more than 60 nights of observations carried out since 2014, and comprises three “layers” of optical and near-infrared imagery: designated by NAOJ as “wide”, “deep” and “ultra-deep”.

Unprecedented view
Included in the new data are extremely sharp images of some of the most distant galaxies in the universe. “These high-quality data will allow an unprecedented view into the nature and evolution of galaxies and dark matter,” announced NAOJ. “This first public dataset already contains 70 million galaxies and stars.”

Better understanding of the distribution of mysterious dark matter - whose true nature remains unknown - in the cosmos is one of the primary scientific missions of the survey, and NAOJ says that in 2015 Subaru identified nine “clumps” of such material based on their gravitational lensing effect. Each clump was found to weigh as much as a cluster of galaxies.

That work was published two years ago, but the new data release covers an area of the night sky 50 times larger than that, meaning that astrophysicists should be able to generate much more extensive maps of dark matter distribution.

Dedicated database
With some 80 terabytes of data to be analyzed, including galaxies at distances up to around 11.5 billion light years away, NAOJ has set up a dedicated database for interested parties to use.

Satoshi Miyazaki, who leads the “cosmic survey” project, said in a release from NAOJ: “Since 2014, we have been observing the sky with HSC, which can capture a wide-field image with high resolution.

“We believe the data release will lead to many exciting astronomical results, from exploring the nature of dark matter and dark energy, as well as asteroids in our own solar system, [and] objects and galaxies in the early universe.

“[Survey] team members are now preparing a number of scientific papers based on these data. We plan to publish them in a special issue of the Publications of Astronomical Society of Japan. Moreover, we hope that interested members of the public will also access the data and enjoy the real universe imaged by the Subaru telescope, one of the largest [in] the world.”

The full HSC survey, which will include data collected on 300 nights, is expected to take between five and six years.

• To access the new dataset, visit the dedicated NAOJ web page here. A second dataset is currently scheduled for release in around two years time, with the third and final one expected in early 2021.