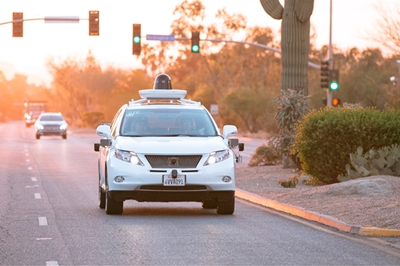 Waymo, the subsidiary of Google’s parent company Alphabet that is developing self-driving cars, has accused Uber and its own subsidiary Otto of stealing mission-critical lidar sensor technology valued at half a billion dollars.

Compact lidar units capable of providing near-instantaneous maps of a vehicle’s immediate surroundings have become key elements in the development of autonomous cars and trucks, with several technology developers gaining major backing over the past couple of years.

When combined with data from more conventional mapping software, radar units and GPS, it is widely anticipated that lidar will provide one of the major technological building blocks supporting the potentially revolutionary changes to transportation – even though significant challenges in terms of size, cost and range are still to be met.

Inadvertent email
In its complaint filed with the San Francisco division of the US District Court, Waymo revealed that it only discovered the claimed infringement of its laser-based technology when it was inadvertently copied on an email sent by one of its lidar component vendors.

“The email attached machine drawings of what purports to be an Uber lidar circuit board,” states Waymo in its court filing. “This circuit board bears a striking resemblance to Waymo’s own highly confidential and proprietary design and reflects Waymo trade secrets. This email also shows that Otto and Uber’s lidar systems infringe multiple lidar technology patents awarded to Waymo.”

More specifically, Waymo claims to have discovered that Anthony Levandowski, a former manager in its own self-driving car project now leading the same effort for Uber, downloaded more than 14,000 highly confidential and proprietary files shortly before resigning.

“The 14,000 files included a wide range of highly confidential files, including Waymo’s lidar circuit board designs,” it alleges, before accusing Levandowski of going to some extraordinary lengths to both acquire the designs and then cover his tracks.

The Waymo complaint continues: “In the months leading to the mass download of files, Levandowski told colleagues that he had plans to set up a new, self-driving vehicle company. In fact, [he] appears to have taken multiple steps to maximize his profit and set up his own new venture – which eventually became Otto – before leaving Waymo in January 2016.”

In May 2016, Levandowski officially launched Otto, which is focused on self-driving trucks, with co-founder Lior Ron. Just three months later the company was acquired by Uber for a reported $680 million, with the aim of revolutionizing freight networks.

Meanwhile, says Waymo, it had devoted seven years to research and development related to self-driving cars, culminating in the first truly autonomous vehicle capable of operating without either a steering wheel or foot pedals.

“These vehicles were equipped with Waymo’s own in-house hardware and sensors, including its uniquely designed lidar,” claims the firm. “Instead of developing their own technology in this new space, [the defendants] stole Waymo’s long-term investments and property.”

Waymo says that, as a result, Otto and Uber were able to build a comparable lidar system in only nine months.

“As of August 2016, Uber had no in-house solution for lidar – despite 18 months with their faltering Carnegie Mellon University effort – and they acquired Otto to get it,” it claims.

“By September 2016, Uber represented to regulatory authorities in Nevada that it was no longer using an off-the-shelf, or third-party, lidar technology, but rather using an “[i]n-house custom built” lidar system,” added Waymo, noting that Uber’s “custom” 64-laser design had the same characteristics as its own. It concluded:

The third-party technology used by Uber prior to the Otto deal had been provided by Velodyne, according to Waymo’s papers.

Single-lens design
Going into some technical detail in its filing, Waymo explains that one of the ways in which it was able to improve lidar systems for autonomous cars was to come up with a single-lens design to both transmit and receive laser signals that scan the area around the vehicle.

“This design greatly simplifies the manufacturing process by eliminating the need to painstakingly align pairs of transmit and receive lenses,” Waymo says, adding that even a slight mis-calibration of a lens pair would compromise the accuracy of the system.

Waymo also claims that it simplified both the design of the laser diode “firing” circuit at the heart of the lidar system, and the collimation of beams from the laser diodes, delivering more compact sensor hardware, capable of higher-resolution imagery.

Neither Otto nor Uber, which recently signed a deal over self-driving cars with Daimler, has yet responded to the Waymo accusations in public or through court documents*.

Waymo is demanding a jury trial and “treble” damages with respect to the US patents it says have been infringed, namely:

8,836,922 entitled “Devices and Methods for a Rotating LIDAR platform with a Shared Transmit/Receive Path”;
9,086,273 entitled “Microrod Compression of Laser Beam in Combination with Transmit Lens”.

Waymo says it has developed three types of lidar sensor, including short-range, long-range and high-resolution variants.

* update: according to press reports, Uber has described the Waymo lawsuit as a "baseless" attempt to slow down a competitor's development.