In 2016, more photovoltaic capacity was added to the US grid than any other electricity source. 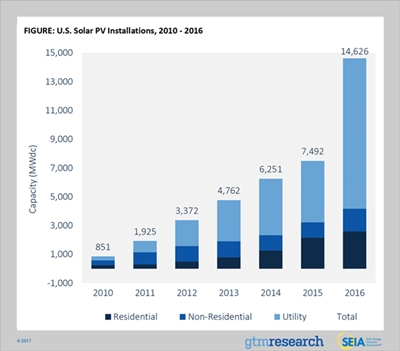 Power surge: PV capacity added in the US

14.6 GW of photovoltaic (PV) generating capacity was added to the US electrical grid in 2016, nearly double the 2015 total and a greater contributor to new capacity than any other energy technology.

According to a new report from analysts at Greentech Media (GTM) Research, huge additions of utility-scale solar power meant that the renewable source accounted for 39 per cent of newly added capacity, including all fuel types.

Banner year for PV
The US Solar Energy Industries Association (SEIA) advocacy group, which co-publishes the US Solar Market Insight report with GTM, said the dramatic upturn demonstrated that the solar industry was a “force to be reckoned with”, and claims that more than a quarter of a million people are now employed in the sector in the US.

Utility-scale deployments rose some 145 per cent year-on-year, the numbers skewed somewhat by an acceleration of certain large projects before it was known whether the important federal Investment Tax Credit (ITC) would continue beyond the end of the year.

However, Cory Honeyman, GTM Research's associate director of US solar research, believes that it is not just about the ITC. “While US solar grew across all segments, what stands out is the double-digit gigawatt boom in utility-scale solar, primarily due to solar’s cost-competitiveness with natural gas alternatives,” he said.

In fact, the 14.6 GW total is slightly lower than the 16 GW estimate that GTM itself predicted back in March 2016.

Even so, the banner year for the technology means that cumulative PV capacity in the US now exceeds 40 GW across more than 1.3 million installations.

Coal to return?
GTM’s figures suggest that PV accounted for 39 per cent of all newly added capacity in 2016, beating natural gas into second place (29 per cent) and wind power into third (26 per cent). All other sources combined amounted to only 6 per cent of new additions.

It represents the very first time that PV solar has led in new capacity installations, but comes at a time when the new Trump administration has publicly advocated a return to fossil fuel sources and coal in particular.

While coal still accounted for one-third of new generating capacity as recently as 2010 (the figure for solar at the time was just 4 per cent), its share fell below 1 per cent in 2014 and has all but disappeared in the past two years.

• GTM Research and the SEIA are scheduled to release the full version of their latest report on March 9.