New devices are tailored to particular applications; from chips to ready-to-use systems. 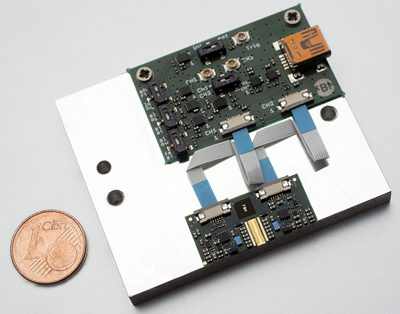 Berlin’s Ferdinand-Braun-Institut (FBH) is to presents novel developments and advances of its diode lasers and UV light-emitting diodes at Photonics West 2018. The SPIE-hosted event in San Francisco runs from 30 January through 1 February 2018.

FBH is also extensively represented at the accompanying conferences (27 January - 1 February 2018) with more than 30 scientific contributions. At the German Pavilion, FBH will showcase its capabilities, offering the full value chain in-house: from design through chips to modules.

1. High-power pulse laser source for LiDAR systems – Lasers generating short optical pulses with widths in the range from 200 ps to 20 ns are key components for a broad range of applications including LiDAR, such as for autonomous driving, 3D object detection, laser scanning (airborne, satellite, and terrestrial) as well as fluorescence spectroscopy and micro-machining systems.

FBH has developed a suitable compact laser source. The laser module uses a tailored design for pulse generation from the institute’s diode laser technology as well as a laser driver with GaN transistor in the final stage offering pulses up to 250 A with controllable pulse amplitude and width.

Integrated on these drivers is FBH’s latest generation of wavelength-stabilized laser diodes that emit 5 ns pulses with 40 W (single emitter) or up to 100 W (3-emitter array) pulse power near 905 nm with good beam quality and up to 85°C. This concept can, of course, be transferred to further wavelengths.

A miniaturized optical isolator, purpose-built for the wavelength of 633 nm, is interposed between MO and PA. It features optical isolation of more than 30 dB and a trans-mission loss of less than 3 dB. The iodine gas cell is also miniaturized, offering a length of only 30 mm and a clear aperture of 2 mm.

The frequency of the module’s emission could be stabilized by the project partner Toptica to be absolute within a 10 MHz band over a time period of one hour. This corresponds to a frequency stability of 2·10 -8, which translates to an accuracy of about 2 microns on a length scale of 100 m. Such accuracy could previously only be reached by large-sized HeNe lasers. FBH commented, “The new laser modules will allow a significantly higher degree of miniaturization of interferometric measurement systems in the near future.”

With SERDS, Raman signals can be extracted efficiently and rapidly from disturbing backgrounds such as fluorescence and ambient light, thus improving Raman spectroscopy in real-world applications. DBR tapered lasers and MOPA systems show diffraction limited output powers up to 10 W and are used for efficient second harmonic generation of the emission into the visible spectral range and up-conversion of mid-infrared radiation via sum frequency generation to the near-infrared range.

The German Pavilion is at booth 4529-51. An overview of the more than 30 FBH contributions to the accompanying conferences can be seen on the FBH website.