Under new law, directing a laser at aircraft, road vehicles or ships could lead to a prison sentence, an unlimited fine – or both. 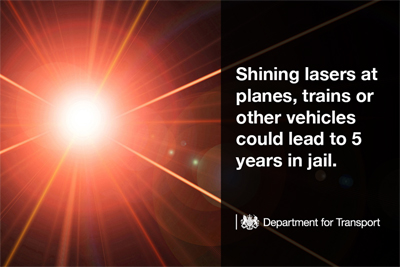 People in the UK who target transport operators with laser devices could be jailed for up to five years under new laws designed to protect the public.

This development follows the Government's announcement in February 2017 that it would introduce stronger legislation and boost police powers to tackle the growing problem of laser strikes.

The Laser Misuse (Vehicles) Bill (a pending law), published today, will also expand the range of vehicles covered, beyond just aircraft, which it is an offence to target with lasers. Drivers of trains and buses, captains of boats and even pilots of hovercraft will be among those protected by the new legislation.

The bill will make it easier to prosecute offenders by removing the need to prove an intention to endanger a vehicle. Furthermore it will remove the cap on the amount offenders can be fined – which is currently limited to £2,500 (equivalent to $3350 / €2830), paving the way for what the Government calls “substantial sanctions”.

Fines could be issued in isolation or alongside a prison sentence. The law would also give police additional powers to catch those responsible for the misuse of lasers.

Aviation Minister, Baroness Sugg commented, “Lasers can dazzle, distract or blind those in control of a vehicle, with serious and potentially even fatal consequences. The government is determined to protect pilots, captains, drivers and their passengers and take action against those who threaten their safety.”

Besides their existing powers of arrest and the ability to search a person once arrested, officers will no longer need to establish proof of intention endanger to a vehicle, aircraft or vessel, making it easier to prosecute swiftly. It will be an offence to shine or direct a laser towards a vehicle if it dazzles or distracts the operator, whether done deliberately or if reasonable precautions to avoid doing so are not taken.

Today’s Government announcement stated, “Laser pens have become a growing concern with the beam from the devices capable of affecting the ability of transport operators to control their vehicles.” 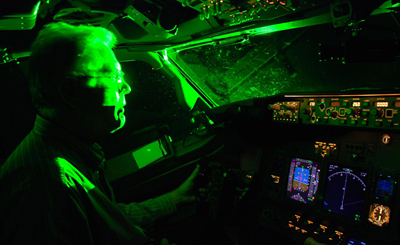 In 2016 alone, the UK’s Civil Aviation Authority received reports of 1,258 laser incidents, with Heathrow the most frequent location for reports of the devices being used recklessly.

At the start of 2017, the Department for Business, Energy and Industrial Strategy ran a call for evidence on the selling of laser pointers and is currently considering the findings before formally responding in the new year.

This problem is global: Since 2005 at least 35,000 laser pointing strikes have been reported to the USA’s Federal Aviation Administration.

Brian Strutton, General Secretary of BALPA, the British Airline Pilots Association, said, “This is good news for transport safety. BALPA pilots and other transport workers have raised the growing threat of laser attacks for some time. The government’s announcement of a bill to tackle the misuse of lasers is therefore very welcome and we will work with DfT to ensure its effective and speedy implementation.”

Commander Simon Bray, the UK’s National Police Chiefs’ Council Lead for Lasers, commented, “Recklessly shining a laser at an aircraft or another moving vehicle is deeply irresponsible and dangerous. By causing a distraction or, in some cases, short or long-term eye damage, laser attacks can lead to catastrophic incidents.

“These new and robust measures send a clear message to perpetrators: laser attacks are a crime and serious consequences will follow from committing this offence. It is essential that the police have the powers required to support these measures and we will continue to work with the government to ensure that these powers are in place.”