Sales up 10% on back of stand-out year for semiconductor investments, with CEO Michael Kaschke focused on future innovations. 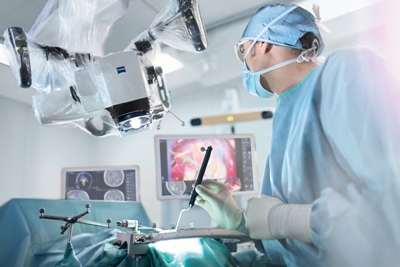 Optics giant Carl Zeiss has reported what CEO Michael Kaschke described as the “most successful fiscal year” in the Germany-headquartered company’s famed history.

At €5.35 billion, sales were up 10 per cent year-on-year, in what has turned out to be a huge boom year for investments in semiconductor manufacturing equipment – one of Zeiss’s key application markets.

SMT sales up 25%
Order intake has risen even more quickly, to stand at €5.63 billion in the year ending September 30, while earnings before interest and taxes rose 14 per cent to €770 million. Zeiss now employs close to 27,000 people around the world – up 6 per cent compared with a year ago.

“The consistent implementation of the strategic agenda has now made a real impact and significantly increased competitiveness,” said Kaschke. “Thanks to investments in cutting-edge Innovation and Customer Centers, global partnerships and strategic expansions, we have focused entirely on the needs of our customers.”

While all four of Zeiss’s application segments saw revenues rise in the latest year, it was the semiconductor manufacturing technology (SMT) division’s jump of 25 per cent, to €1.21 billion, that propelled overall company sales to the all-time high.

“The SMT segment is benefitting from high demand for deep-ultraviolet (DUV) lithography systems,” Zeiss reported. “After a trend toward stagnation in an extremely volatile market in recent years, SMT successfully increased its revenue by 25 per cent, a new all-time record.”

It added that the “determination and perseverance” of investors in extreme ultraviolet (EUV) lithography is also now paying off, as is the strengthened partnership with the key lithography tool vendor and EUV proponent ASML.

Earlier this year ASML purchased a 24.9 per cent equity stake in the subsidiary Carl Zeiss SMT, part of a strategic move to ensure that the highly complex optics needed for future generations of EUV systems will developed successfully.

Accompanying that equity investment is around €760 million earmarked for EUV optics research and development seen as necessary for pushing state-of-the-art chip designs to new levels of miniaturization and complexity.

R&D spending up sharply
Zeiss’s overall spending on research and development activity accelerated nearly 27 per cent in the year, to €552 million and equivalent to just over 10 per cent of company turnover.

One example of where that investment is going is the company's new €30 million innovation hub in Karlsruhe, which will forge closer links between academia and industry while providing a newly expanded home for the nanotechnology manufacturing equipment company Nanoscribe.

Geographically, the Asia-Pacific region grew fastest during the latest year, with revenues jumping 15 per cent to €1.27 billion (after adjusting for currency fluctuations). Revenue amounted to €598 million in China alone, said Zeiss, up from €504 million previously.

However, the largest single market by country remains the US, where Zeiss completed sales worth approximately €1 billion.

Looking ahead, Kaschke said that he saw only a few risk factors on the horizon in terms of the global economy, commenting: “Of course we have benefited from tailwinds from the positive economic climate, but ultimately you only win if you also take responsibility and make bold decisions for the road ahead.

“With our innovative products and solutions, we see transformations in technology and society such as digitalization and demographic change as a significant growth opportunity," added the CEO, who expects Zeiss to post a “slight organic increase” in sales next year.