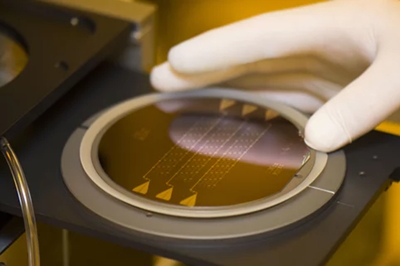 Compound semiconductor epiwafer foundry IQE says it will post a sharp increase in overall sales this year – with the momentum largely a result of fast-growing demand for vertical cavity surface-emitting lasers (VCSELs).

In a trading update for its current fiscal year, which ends December 31, IQE said it would post sales of “at least” £150 million. That would represent around a 13 per cent rise on 2016, with the company adding that it expected revenues from its photonics unit to be double last year’s figure of £22.8 million.

Strong and sustainable
Company CEO Drew Nelson said in the update that IQE was on track to post record financial results, adding: “The adoption of VCSELs in the mass market has been a key revenue driver in the year. IQE has built a strong and sustainable lead in this complex materials technology.”

He expects VCSELs to become a long-term growth driver for IQE, with the technology cutting across a diverse range of applications aside from optical communications and sensing, citing possibilities in lidar, industrial heating, machine vision and heat-assisted magnetic recording.

IQE said that its photonics business witnessed a sharp acceleration in demand in the second half of this year, after a VCSEL product development program moved into mass market production in June. It has worked closely with Ulm-based VCSEL provider Philips Photonics on a recent production scale-up.

That should see that the firm’s photonics division post sales of around £46 million during 2017 – compared with likely sales of around £91 million from its wireless division, historically the company’s largest by far.

IQE believes that it has built up an intellectual property advantage over rival VCSEL producers in recent years, with its 6-inch wafer capability offering the means to scale the technology – which demands the deposition of a complex layer structure – to the mass market.

The company can also produce the VCSEL epiwafers at two locations, and says that it has already signed several multi-year supply contracts.

Foundry expansion
IQE complements its photonics and wireless business units with an infrared product division that, among other things, supplies advanced antimonide wafers suitable for high-end applications in mid-infrared imaging.

The infrared division is expected to report sales of around £12 million this year, with “major OEM and device companies” now engaged on a variety of product development programs, suggesting that mass-market consumer applications will soon take off in this sector as well.

To meet the anticipated growth in demand across its product line, IQE announced in July that it was planning to expand foundry operations at a site close to its Cardiff, Wales, headquarters, an area that is also home to the UK’s “Compound Semiconductor Cluster” and a £50 million government-backed “catapult” applications center.

Last month, the London-listed company also raised £95 million in a placing of new ordinary shares, saying that it planned to buy as many as 60 new metal-organic chemical vapor deposition (MOCVD) machines to grow the critical layers in compound semiconductor wafers.

Those machines are set to be installed over the next few years at the company’s new foundry, with VCSEL devices a key element of the anticipated sharp increase in demand.

“IQE is enjoying material demand for its VCSEL wafers from a leading global consumer electronics company for use in one of its mass market consumer products,” said the company in early November. “In conjunction with multiple other customer engagements IQE expects this demand to increase as its technology is applied across multiple consumer applications and platforms.”