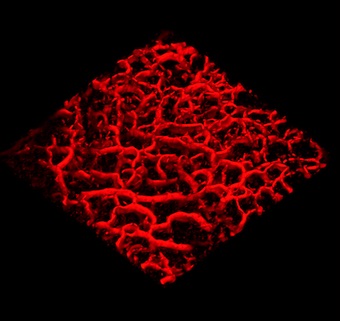 An OCT platform capable of imaging blood vessels and the flow within them could help clinicians treating patients with melanomas to more rapidly diagnose the spread of the cancer, and reduce the need for time-consuming biopsies.

Developed by a European FP7 research consortium including Michelson Diagnostics, and building on Michelson's existing VivoSight OCT platform already used to study non-melanoma cancers, the new technology should also be of value in the broader medical and aesthetic sectors.

A collaboration between Michelson and aesthetic laser vendor Sciton on OCT-guided laser therapy has already been announced.

The existing VivoSight platform employs Fourier domain OCT to image suspected non-melanoma tumors in order to accurately assess the extent and depth of the lesion, and the effects of any treatment. But melanomas present a different challenge.

"Melanomas are cancers in pigmented layers of the skin, while non-melanoma cancer occurs mostly in the basal membrane just below the epidermis, especially in white skin," commented Jon Holmes of Michelson Diagnostics.

"The existing VivoSight OCT does not 'see' melanin with its near-IR wavelength, which is an advantage in terms of the variety and colors of skin it can be applied to. But it makes diagnosis of melanomas difficult."

ADVANCE - from Automatic Detection of VAscular Networks for Cancer Evaluation - was a three-year seven-partner European project concluded in late 2016, which aimed to conceive, implement and pilot in a clinical setting an OCT platform capable of detecting and visualizing vascular blood vessel structures, such as those grown by malignant melanoma.

The solution it developed employs a variant of OCT termed speckle-variance OCT, or dynamic OCT (D-OCT), which studies the speckle of light patterns created by moving blood cells. The principle involves taking multiple OCT images at around four frames per second and compiling them together, so that a clinician can tell where something has moved on the image from frame to frame.

"Capturing OCT images in the same location in rapid succession allows us to look for changes in the fine-grain speckle pattern caused by blood flow," said Holmes. "Although there are some alterations to the scanning set-up, this technique can use basically the same hardware as the existing VivoSight, but apply new processing methods to construct a visual map of blood flow from the OCT data."

Medical and aesthetic applications
All cancers spur the creation of blood vessels to supply the developing malignancy, but these new vessels can have a distinctly different shape from the vessels seen in healthy skin. Instead of the regular mesh of fine blood vessels seen in unaffected tissues, melanomas create twisted and coarse vessels of varying thickness, a characteristic pattern that Holmes compares to the roots of a tree.

"The shapes of the vessels could give an indication of the progression of the disease, as well as the degree of malignancy," he commented.

The new platform has already been given approval by the US and European regulators, and early trials before the completion of the ADVANCE project showed the technique's potential, but full adoption in melanoma treatment will require some further studies and validation.

An impact outside of cancer treatment could happen sooner, however, given the wide variety of skin conditions and injuries where a clear picture of blood flow would be of value.

It should allow clinicians to know whether a serious wound is healing or requires a change in treatment, for example, or help doctors to more rapidly determine whether a burn victim's skin graft has been effective, as Holmes explained.

“Ultimately with the ADVANCE scanner, not only can thousands of lives be saved and many millions of Euros in cost savings be made annually worldwide, but there is no price we can put on a patient not having to go through an unnecessary operation with potential long term debilitating side effects, or wait an unnecessary amount of time for treatment.”

Imaging of blood vessels is also very much of interest to developers of aesthetic laser treatments, and last week saw the announcement of a collaboration between Michelson Diagnostics and Sciton, the Palo Alto-based manufacturer of laser and light systems in the aesthetic and medical market, to develop OCT image-guided laser applications in that sector.

"While VivoSight can be used for precision diagnostics alone, we are especially interested to inform distinct OCT image-guided laser applications that benefit our clinical customers by benefiting their patients," said Dan Negus of Sciton, announcing the collaboration.

Jon Holmes believes that the new technique could help in assessment of the many diseases of the skin which involve inflammation of the blood vessels, or in treating the vascular lesions involved in conditions such as port wine stains or spider veins.

"It gives you a way to actually see how deep and large the vessels are, and then tune the treatment laser to get the best result for the patient," he commented. "We are optimistic that there will be many new applications in the future."