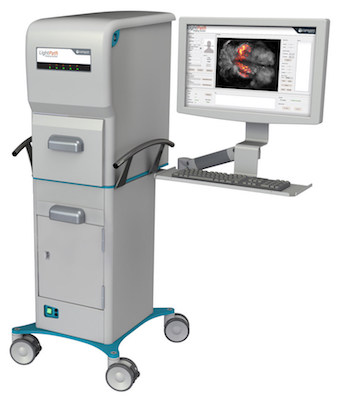 A new clinical trial by the Netherlands Cancer Institute (NKI) and funded by the Dutch Cancer Society will investigate the use of Lightpoint Medical's molecular imaging technology as a guide during prostate cancer surgery.

The trial, supported by partners the University of Twente and Philips, intends to evaluate Lightpoint's LightPath platform and its ability to assist clinicians in the accurate removal of cancerous tissue, a pressing concern in the treatment of prostate cancer where distinguishing cancerous from non-cancerous areas has proven difficult.

Tuch was also one of the ten entrepreneurs recently named by the UK's Royal Academy of Engineering as recipients of support from the RAE's Enterprise Hub, a further indication of the disruptive potential of the company's technology.

LightPath is based on Cherenkov luminescence imaging (CLI), which exploits the electromagnetic emission created when a charged particle passes through a medium at a speed greater than the velocity of light in that medium.

This effect, the same one that creates a characteristic blue glow in underwater nuclear reactors, can also arise when radiotracers are introduced into animal tissues for bioimaging purposes in positron emission tomography (PET), occurring as the charged particles emitted by the tracers enter the surrounding tracers.

Improve survival rates
CLI, first proposed in 2009, can potentially allow luminescence imaging equipment to visualize both clinical diagnostic and therapeutic radionuclides, although the operation involves inherently lower amounts of light than bioluminescence or fluorescence, and is now moving towards clinical use thanks to advances in both optical systems and approved radiotracers.

The NKI trial is evaluating the diagnostic performance of the LightPath imaging system when applied to a particular imaging agent, one that is in turn targeted to Prostate Specific Membrane Antigen (PSMA), a surface protein expressed in prostate cancers.

Lightpoint, a privately-held medical device company located in Chesham, UK, has progressed its CLI technology from concept stage to clinical data and CE mark in less than four years, a rapid translation assisted by the technique's use of materials that are already familiar to clinicians and regulators, according to Tuch.

"One of the major advantages of CLI over fluorescence imaging is that it uses imaging agents that are already regulatory approved and clinically validated," he said. "Consequently, CLI bypasses the insurmountable capital and time required to get approval for novel imaging drugs. It also allows for direct correspondence between pre-operative imaging, intra-operative imaging, and follow-up."

This means that CLI could help to guide urologists through different stages of a procedure using the same tracer, something the NKI clinical trial will investigate.

"Assessment of resection margins with highest accuracy during surgery might improve recurrence and survival rates," commented Marcel Stokkel of NKI. "The collaboration with Lightpoint Medical, Philips and the University of Twente is the most optimal setting to reach this goal and to complete this study."